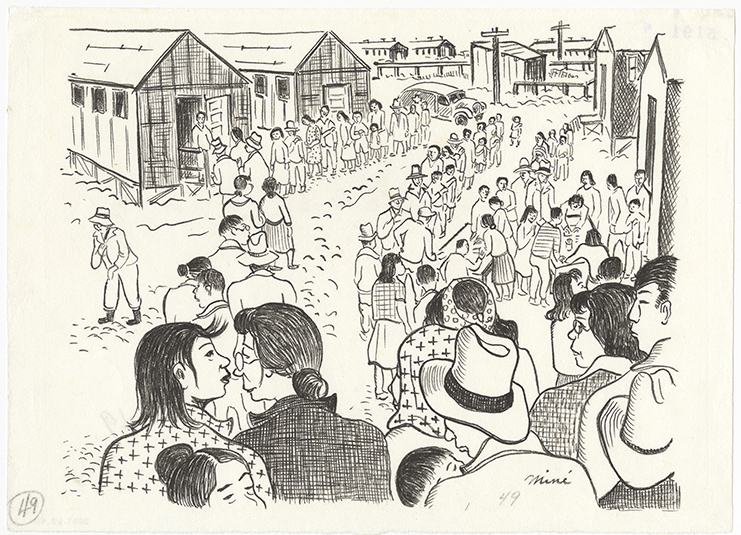 In 1946, only a year after the end of WWII and while some Japanese Americans were still being detained, the American public first learned about the Japanese American forced removal and incarceration through the eyes of an independent woman who lived through it. The Japanese American National Museum in Los Angeles is celebrating the 75th Anniversary of Miné Obubo’s landmark graphic novel Citizen 13660 with Miné Okubo’s Masterpiece: The Art of Citizen 13660, which showcases some never-before-seen original artwork, drafts from that book, and a myriad of other artifacts of this remarkable artist, visionary and determined individual.

This exhibition is not to be confused with the unfortunately similarly titled Citizen 13660: The Art of Mine Okubo that showed at the Skirball Cultural Center in 2015-2016. That small gem of an exhibition drew together sources from multiple institutions including the most important Mine Okubo collection for Social Justice and Civil Liberties at Riverside City College and focused more upon Okubo’s depth as an artist and the visionary she truly was. It was lighter in the number of artifacts, but the selections and their presentation made the exhibition competitive above its weight class.

In sharp contrast, the current JANM exhibition is many times larger and relies upon its own impressive holding of Okubo’s works and appropriately centers attention on the 75tth Anniversary of the publication of Citizen 13660. The focus and purpose are quite different from that earlier show and thus worth seeing even for those who had viewed the Skirball exhibit.

The core of this celebration can be found in the main gallery where 28 of the original 198 pieces of artwork for Citizen 13660 are showcased, whereas only two were on display at the Skirball. These carefully selected works not only demonstrate Okubo’s power of observation, but also narrate the story of the incarceration experience to viewers who might know little about it.

Also consistent with the museum’s educational mission, there are things to help younger audiences connect with the story and content of the exhibition, such as a wall mounted oversized interactive map based on Okubo’s original graphic map of the Topaz camp for Trek magazine and a take-home gallery guide for youngsters.

Most viewers will find the viewing experience of strolling through the main gallery quite pleasant and informative. Given the quality of these originals, their pristine condition, careful curation, and larger than publication size, the gallery feels more spacious and the selections more numerous than they actually are.

The other small exhibition spaces are glimpses into the very complex artist Okubo was and into the birthing of the book Citizen 13660. Among these are displays of early drafts and mockups, and samples of edits of her original text that accompanied each drawing, some by her hand and others by unknown ones. Some of the edits effectively streamline the messages, but in at least one case (the incident of the fatal shooting of an internee), they change the tone completely.

As spontaneous as the line sketches look in the published folio, comparisons of some examples of the early sketches with the finished pieces show mindful and deliberate changes for artistic and editorial reasons. Although the published versions still have the feel of spontaneity, and even sometimes whimsy, elements of them are actually not. These meticulous changes show a level of artistry that are not immediately apparent and rightfully elevate this artist’s status.

Some of the quick studies of variations of a single subject or topic show Okubo’s keen sense of observation and a supple mind that could create in the simplest of lines a nearly endless permutation of poses and possibilities. For instance, a single sheet of paper holds dozens of depictions of people struggling to awkwardly carry their hay-filled mattresses to their newly assigned barracks. A reproduction of the final version and an actual publication mockup show the refined distillation in Okubo’s process.

There is little in the way of text to inform visitors of what they see in the exhibition, save for the introductions in the effective antechamber, whose dramatic color, graphics, lighting and its central case of first edition Citizen 13660 folios irresistibly draw visitors to step inside. Understating things was a deliberate choice of the curators to allow the artworks to carry the message by themselves, without overt editorial comment. In most cases, this works well, but less well in others.

It is perhaps too easy to miss the extraordinary revelations that are present here, most certainly for the person who casually strolls through the galleries. The presentation of the aforementioned editorial changes and artistic polishing, as well as the pieces that demonstrate the significant effort in the book’s birthing, could have been sharpened and molded for the especially curious and the artistically inclined.

The incidental pieces and artifacts that are interspersed throughout the galleries are noteworthy, including Okubo’s work for Trek, a literary magazine published by internees while detained at Topaz, contemporary book reviews of the initial publication of Citizen 13660, and her work for national magazines in New York in 1944. Although these are rich treasures of information, the traditional way they are displayed, caged in glass, makes them difficult to read. Some museum exhibitions now use touch screens to display text and to facilitate reading, and that kind of supplemental device would have enhanced the presentation, as well as a way to make all of the 198 illustrations accessible.

There is no doubt that Miné Okubo was a far more complex artist and person than her book and this exhibition might initially suggest. She was outlier several times removed even though her experience of deprivation and imprisonment during WWII was somewhat similar to other Japanese Americans. Okubo was 30 at the start of the war, a decade older than her average American-born Nisei peers, determined to be single, obsessive to the point of compulsive about art, and only her brother and her were together in Topaz, with the rest of her family scattered around the country in other confined facilities. Forced to live in the bachelor barracks with her brother, her experience was tortuous.

Her art outside of Citizen 13660 is distinctly different, having the stylized influence of early 20th Century modernists. Bold in color, brush strokes, and in emotion, that art is a world away and only hints of that Okubo are present in this show. It is unfortunate that Okubo is largely remembered only for her line drawing work in Citizen 13660, and this exhibition only offers glimpses into that other world with only three of her paintings independent of the book.

The very thing that makes JANM’s Miné Okubo’s Masterpiece: The Art of Citizen 13660 so wonderful is also the thing that creates an unfulfilled appetite for more. The enticing hints of an extraordinary artist are certainly present here with the revelations of the evolution of Citizen 13660. However, given the riches of Miné Okubo’s other artwork already in possession of JANM but not on display, satisfaction is possibly within reach and the hope for a subsequent follow up exhibition is alive.

Miné Okubo’s Masterpiece: The Art of Citizen 13660 is on display through February 20, 2022. Visitors before January 09, 2022 will also be treated to A Life in Pieces: The Diary and Letters of Stanley Hayami whose gifts as a talented young writer and sketch artist nicely complement the Okubo exhibit.