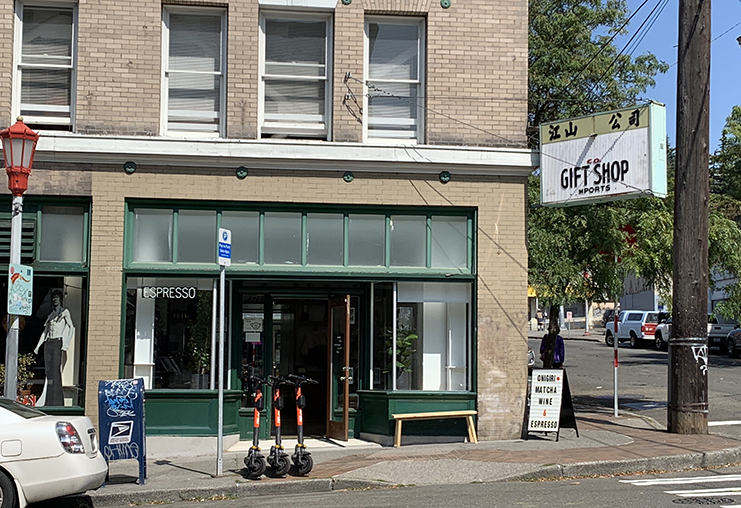 At the start of this year, father and son Seattle residents Joe and Henry Whinney opened an espresso cafe in the center of the CID. But unlike an average coffee shop and true to International District, this corner store acts as an expanding space for opportunity for local creatives.

Gift Shop (that’s its name, notice the caps) opened its doors during the height of the COVID-19 pandemic with the goal of making the space as one for the CID community. Filled with flourishing plants and guest-requested music, Gift Shop team envisions its small space as a comfortable gathering place for all community members — a spot to find good prints, grab a quick snack, or just to hang out for a few hours.

“We’re working on our inventory — we want to bring more light here,” director of marketing Annie Park said. “We want to make this a destination for the people.”

While locally-curated art, prints, food, espresso and natural wines are displayed on its normal business days, the cafe is most known notably for being the site of many pop-up events showcasing the work of small businesses and local artists.

Prior to the shop’s opening, the Whinneys were initially set to open a different shop in the ID called the Pylon Market, set to showcase global artistry as “interconnectedness of self, society, and the natural world”. The opening for the artist shop, however, was delayed, and their team began working on opening Gift Shop with a similar vision in mind. During its opening weeks in January, the staff slowly welcomed in the CID community — those natives to the neighborhood, newcomers, and creatives.

“People came by with ideas for events,” Park said in an interview. “We would always ask, ‘what can they bring as far as joy or sharing with the community?’”

Gift Shop began hosting a variety of pop-ups following mask mandates and social distancing rules. Although the shop was unable to host a grand opening or large gatherings in the beginning stages of the project, the event interaction has continued to evolve along with the restrictions of the pandemic. From Lauren Tran’s French-Vietnamese pastries to Paul Castillo’s Asian American and Pacific Islander-centered photo and zine exhibition, Park described the cafe as a ‘testing ground’ for creatives struggling in the pandemic with job loss or finding permanent space.

“Anyone who needs a little push or opportunity is something we can give to them,” Park said.

Pop-ups such as the mother-daughter duo of Lola’s Lumpia, have had multiple events at Gift Shop due to high demand. Lola Carol and Kat sold preordered frozen lumpia and fried fresh ones on sight, selling out before the day was even over each time they took over the space.

While some events feature stand-alone creators, many collaborate with one another. Last month, Seattle-based press company Anemone and Japanese cafe and bar Sankaku hosted a pop-up that showcased newly-released zines from local collaborators. Sankaku owner Rie Otsuka described the event as a “miracle day” as she was able to create connections with various artists. Gift Shop became Sankaku’s first outpost following the event, selling owner Rie’s onigiri and osozai on their weekly menu.

As the world comes out of COVID restrictions, the shop is looking to transition from a freelance space into a more traditional cafe while still keeping it as an open gathering place for  community members and creators. Park says they will continue to host pop-ups, hoping to make community events consistently every week.

“I see so much potential for this space,” she said. “We want to be more established with a little bit of surprises to keep it interesting for the community,”

Gift Shop is now open on the corner of King Street and 7th, and their sister company Pylon Market is set to open this fall.