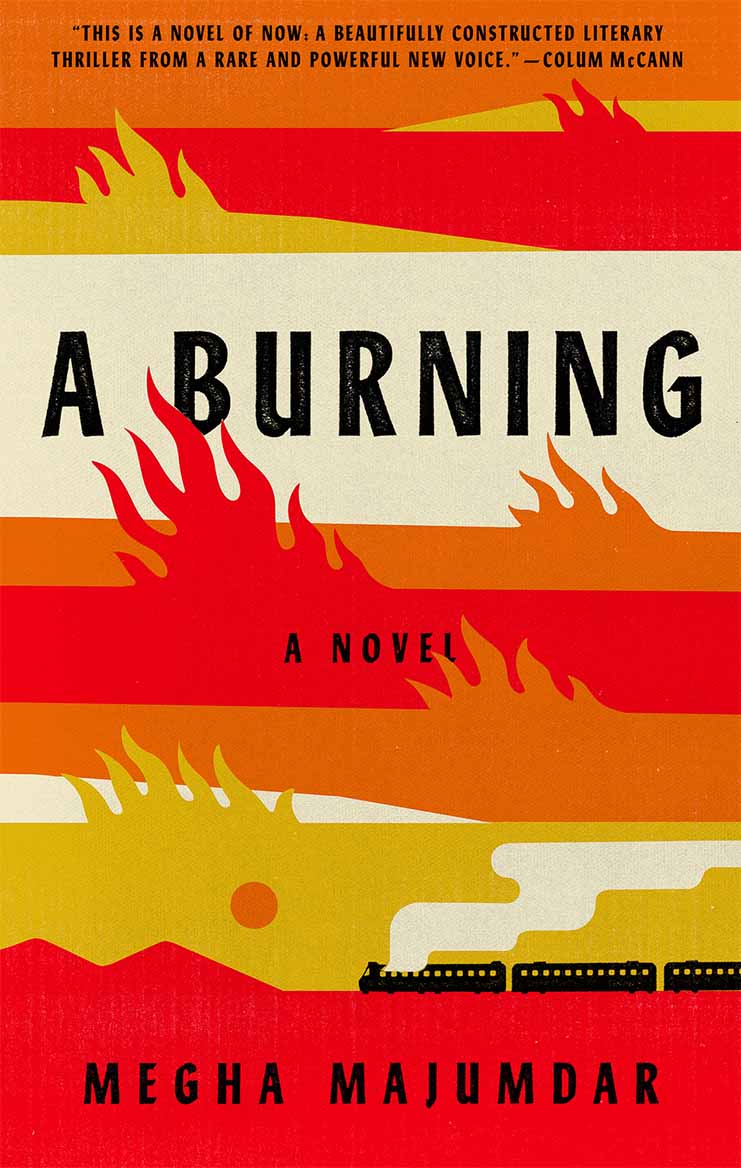 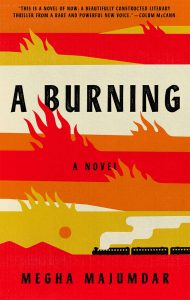 Megha Majumdar’s debut novel is getting a lot of attention in the press and social media as a new and important literary voice. Majumdar was born and raised in India and studied at Harvard and Johns Hopkins University. An anthropologist by training, she has worked as an editor for Catapult magazine. The novel intertwines three characters and their stories: Jivan, Lovely and PT Sir. These characters are loosely connected to each other in that Lovely is a trans woman and aspiring actress who learns English from Jivan, a young Muslim woman accused of a terrorist act. PT Sir was Jivan’s physical education teacher at an elite girls school where Jivan had been a scholarship student supported by an NGO committed to educating poor girls from slums.

The novel’s catalyzing event is a burning down of a train in a Kolkata station with people trapped inside. Jivan, a young Muslim woman who works at a clothing store Pantaloons, witnesses the burning. Later that night as she tracks Facebook posts, she comments on someone’s post of a video of the incident. In response to an unknown person’s comment, she writes, “If the police didn’t help ordinary people like you and me, if the police watched them die, doesn’t that mean…that the government is also a terrorist?”

Soon after Jivan is arrested and accused as being the terrorist who set fire to the train. One of the pieces of evidence against her was a package she carried which the government argued was kerosene and rags used to set fire to the train. The prosecution argued that Jivan was friends with a known terrorist recruiter on Facebook and had aided in the violence. The court appointed lawyer does very little to help Jivan. Jivan tells us that her package contained books for Lovely, who she was tutoring in English. PT Sir, her teacher, sees the television coverage and remembers the poor, hungry, former student whom he had tried to help with occasional meals during the school day. PT Sir is called as a witness in the case for Jivan.

While the burning train is the event that links the three stories, each person’s narrative offers us much more. We learn of Jivan’s early life, her father’s injury, the family’s move to a Kolkata slum, their poverty, and her desire for upward mobility and middle class life that takes her from being a charity student at an elite school to a job in a mall store that brings her little luxuries like a smartphone. Lovely tells us about her childhood where she is raised as a boy and her subsequent departure from the family home after she comes out as trans, her life in the hijra community, her desire to be an actress for which she takes acting lessons. A viral WhatsApp video launches her film career. PT Sir leads an unremarkable life with his wife until a random opportunity to attend a political rally for a newly emerging populist party changes his life. He experiences a dizzying rise through the party hierarchy, which is facilitated by his ability to perform many unethical favors for the party leader, a charismatic woman.

Majumdar’s novel structure is taut with these three interspersed narratives occasionally punctuated by sections titled “Interlude.” Although the narrative draws upon elements in a thriller—a crime, an innocent victim, a bureaucratic legal system—and plays upon reader expectations for a resolution that provides justice, the novel refuses to offer any standard plot conclusions.

Majumdar’s novel calls to mind other literary works that have employed similar themes, scenes, or characters. The sections that deal with Jivan’s prison life call to mind Nawal el Saadawi’s Woman at Point Zero although Jivan is no Firdous. The focus on police corruption and a failed democratic state that inflicts violence on its marginalized reminds one of Vikram Chandra’s Sacred Games and Arundhati Roy’s The Ministry of Utmost Happiness. The hijra protagonist is now quite a de rigeur presence in contemporary Indian writing and popular culture and recalls Roy’s hijra protagonist in The Ministry of Utmost Happiness as well as the hijra in Jeet Thayil’s Narcopolis.

Additionally, the events in the novel also echo numerous current news stories about state sponsored Islamophobia, violence against the poor and marginalized, and the burning itself is reminiscent of the 2002 Godhra incident that touched off nation-wide communal violence. For an Indian reader or a person familiar with Indian politics of the last 20 years, this novel does not offer anything new. It evokes sympathy and horror. For the non-Indian audience, particularly in the United States, this novel is timely in its exploration of Islamophobia, state sponsored violence, police terrorism and a failing democracy.