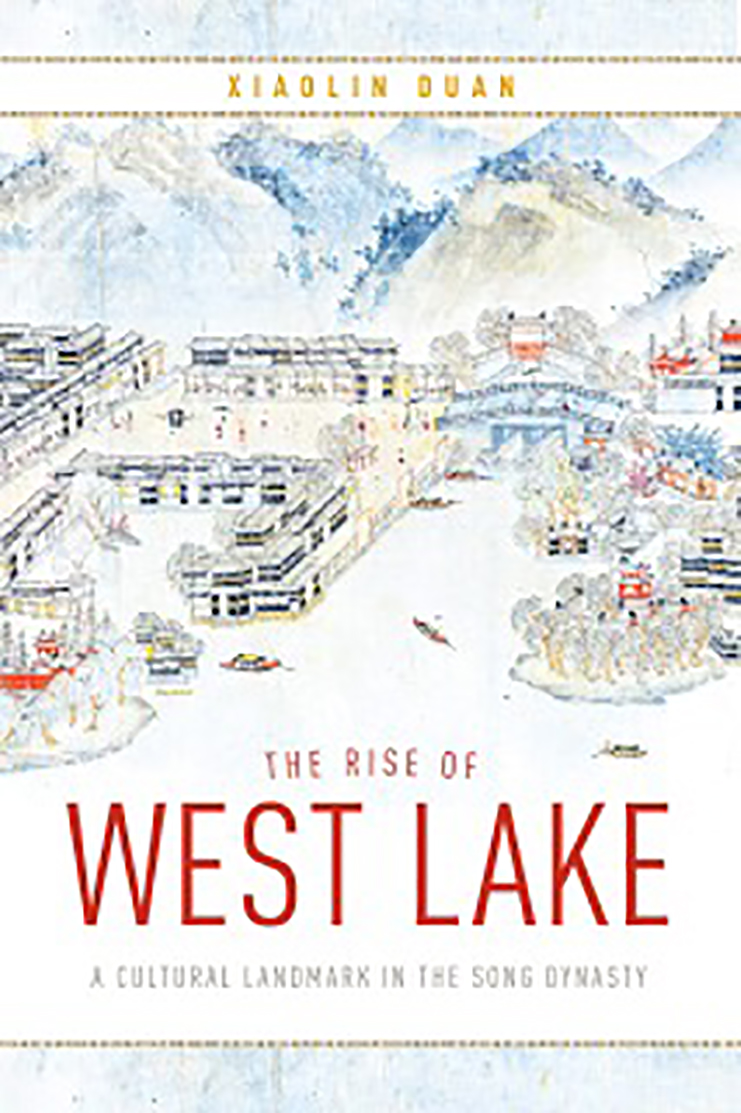 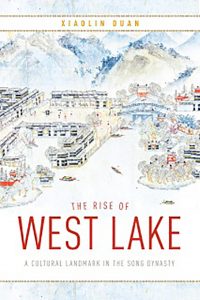 The back cover gives a summary of the book:

“Lovely West Lake, near scenic Hangzhou on China’s east coast, has been celebrated as a major tourist site since the twelfth century. Now as then, visitors boat to its islands, stroll through its gardens, worship in its temples, and immortalize it in poetry and painting…

“In the first in-depth English-language study of this picturesque locale, Xiaolin Duan examines the interplay between human enterprise and the natural environment during the Song dynasty (960–1279). After the Song lost north China to the Jurchens and the imperial court fled south, a new capital was established at Hangzhou, making the area the national political and cultural center. West Lake became a model for idealized nature… [and emerged] as a tourist destination…

“The Rise of West Lake explores the complexity of the lake as an interactive site where ecological and economic concerns contended and where spiritual pursuits overlapped with aesthetic ones.”

This is a scholarly book. I’m writing this review as a non-scholar, but I am very interested in the story and history of West Lake. I’ve studied Chinese painting and visited West Lake as a tourist. West Lake holds an outsized mystique in the Chinese mind. Its beauty is hyped beyond expectation. It is a place where legendary historical figures like Ouyang Xiu and Su Shi lived, whom every Chinese child knows from school.

I love the details in the book that bring the place and time back to life, like the list of items sold at West Lake for visitors, including “props for drama, ornamental plants, flowers baskets, painted fans, colorful flags, sweet fish, rice-flour cakes, clay figurines, toys mounted on sticks, powder balls, seasonal flowers, and clay baby dolls.”

West Lake was a complex place entwined in the lives and minds of the people, in so many ways, as a place of beauty, a place of nature, a place for fun, a place of power, a place that embodied stories, ideals and memories. As an example, even the food found around West Lake can evoke strong emotions, like the fish soup that brought back nostalgia for the old capital Kaifeng. West Lake and Hangzhou were a mixing pot of food, ideas, people, and classes.

One of the fascinating things I learned is that the challenges facing West Lake many hundreds of years ago, and thousands of miles away, are familiar to us here today.

West Lake experienced many of the same positive and negative consequences as famous tourist sites today. Its fame generated tremendous wealth for the region. Its natural state and beauty suffered from overuse and misuse, but its importance moved officials to enact protective policies. It received so many visitors that temples became tourist destinations, even inns, some known for their vegetarian food, as Can Xun (1098-1174) wrote, “I also like the vegetarian dishes, with fragrant vegetables and bamboo shoots.”

We can learn from some interesting ideas/policies to apply to our modern world, especially in the area of support for the arts and culture. When the wider region around West Lake experienced a famine in 1050, a local official Fan Zhongyan continued to advocate for and support tourism, so that “Hangzhou was the only city in the region to emerge economically unscathed from this challenging year.”

West Lake was such an iconic place that it created a cultural trope, the “Ten Views”, which eerily reminds me of how today we might use a hashtag #10Views. The “Ten Views of West Lake” were not just a list of must see sights or a visitor guide. They “defined a place, and influenced how viewers interpreted what they saw.” They inspired poetry and painting. They became an integral part of Chinese culture. Later poems used them to evoke the nostalgic past, lamenting changes. Other famous places had to have their own Ten Views. They even became a political tool, when a Qing emperor (a non-Chinese Manchu outsider and conqueror of the 17th century) wrote poems about the Ten Views of West Lake to connect himself to past dynasties, signaling his lineage to the past, and his legitimacy as a ruler of China. The “Ten Views” were a way for “everyone to share a unifying set of memories.”

For a non-scholar, the book’s level of detail is probably more than enough, so the pace can be a little slow. I do appreciate the detailed references to sources, in the event that I want to explore further. I also appreciate the Chinese words in the index.

The Epilogue itself is quite worth reading. It’s a fast paced tour of West Lake from the end of the Southern Song dynasty to the present.

The Map 1.1 is very useful in visualizing what’s described in the text. I do wish it were larger and easier to view. Or the reader may be directed to an online link to a larger map. This comment goes for many of the other maps and illustrations in the book.

Overall, I learned a lot from this book, from the history, and from a new perspective of writing about a place. Many details intrigued me and moved me to search for more information beyond the book.