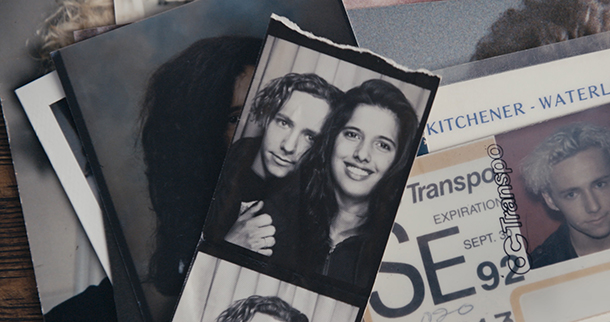 Attiya Khan’s approximately 80-minute documentary, A Better Man, is a snapshot in the lifelong marathon that is recovering from perpetual and inescapable abuse inflicted on someone by another person. It’s a breakthrough moment in real time of a woman reclaiming her life, her security, her feeling of safety and normalcy after surviving an abusive relationship.

When Khan was 16 years old and in high school, she met Steve, who was 18. In the opening of the film, she shows pictures of them together at this age. She drops the photos on a table, and the camera closes in on the stack of pictures. The one that lands on top was taken in a photo booth when they were in high school. They’re a mid-90s hipster couple looking young and happy to be near one another.

It becomes an increasingly unsettling photo as the film dives into the daily physical, verbal and emotional abuse Khan survived in the years surrounding the timing of when the photo was taken. Khan and Steve (only his first name is used throughout the film) were together for two years. In that time, he regularly beat and degraded her. The documentary is not about confrontation of this abuse as much as it is about hearing him admit that it happened, if he even thought about what he did to her.

“Women are always asked why we stayed,” Khan says in a voice over. “But I had questions for you. I wanted to know if the violence stayed with you. If you felt as damaged as I did.”

Through Khan’s initiative, A Better Man brings her back into contact with her abuser, Steve, 20 years later. She now has a loving partner and a young son. The documentary goes into no details about his current life. Khan’s in control. The film follows Khan and Steve as they retrace their steps together through the years of abuse. They meet with a domestic violence therapist together. They visit their old apartments they lived in together where most of the abuse took place. They go back to their high school, where they met, and where, Khan learns, teachers and counselors knew about the abuse and didn’t intervene or help.

“Everyone knew?” She asks Steve as they stand in the hallway, now in their late thirties, in the high school. He nods.

A similar realization takes place when they visit one of their old apartments. She recalls to him on that visit that she would run out of their apartment to escape his beatings. She would run down their street pleading for help as a teenaged girl scared for her life and covered in bruises and no one would come out. One person even looked at her through their window and pulled the curtain closed. Upon this memory, 20 years later, she nearly vomits there on the street.

After she got away from him when she was 18, they continued to live in the same city. Even in a large city, you run into your exes (as anyone in Seattle can attest to). She would see him off and on. She doesn’t go into the details of the encounters but it was implied that they were both civil and maybe even cordial.

Yet throughout this timeframe, as she would see him in various places throughout the city and likely smile and make small talk for as long as she could handle, she celebrated her anniversary of getting away from him every single year. She said some years it was as small a gesture as being by herself and lighting a candle. Other years, she would throw parties. On the outside, she’d moved on — a partner and son and a job as a domestic violence counselor. But the nightmares continued. The PTSD issues continued.

So she contacted Steve, told him what she wanted to do in making the documentary, and invited him to be a part of it. And he agreed.

“I sense that the conversation would be as important to you as it was to me,” she says in a voice over. Steve says to the therapist in a session in which Khan is not present that if he could help even just one man understand that violence against women isn’t acceptable, it would be worth it to him to participate in the film.

The film isn’t about redemption. And it doesn’t delve into psycho-analyzing either one of them or work to show the audience he was abused and she was abused and this is a cycle of abuse, because that doesn’t matter here in this documentary. It’s not about getting those answers. It’s about sitting down in the same room with an objective third party as a mediator and telling your abuser what they did to you and being present to observe them while they have no choice but to listen — as one has no choice but to absorb the blows when they are getting beat up — and to witness them take in the impact of their abusive acts. She does so, and so does he.

Khan is Indian Canadian, and Steve is white. She addresses only once how he used her race and brown skin to keep her down. “You have a thousand ways of saying how I deserved to be hit, spit on, made fun of, because I was brown.” It’s the only time in the film she addresses his whiteness and her non-whiteness. It only needs to be said once, and it is done so precisely in the very middle of the film.

A Better Man is a prolonged snapshot of what may be a final step before one gets to be themselves without the trauma of abuse dictating their daily life. It doesn’t look back too much in terms of looking for the source of Steve’s behavior, and it doesn’t look forward. It’s present. It’s a moment in a lifelong process of what some would call healing, and others would just think of as continuing to put one foot in front of the other and feeling thankful and resilient as a survivor.

A Better Man plays as part of the Tasveer South Asian Film Festival at Bellevue Art Museum on October 1 at 7:00  PM. The screening will be followed by a panel on domestic violence moderated by members of API Chaya and a discussion of the impact of #MeToo on the South Asian community.