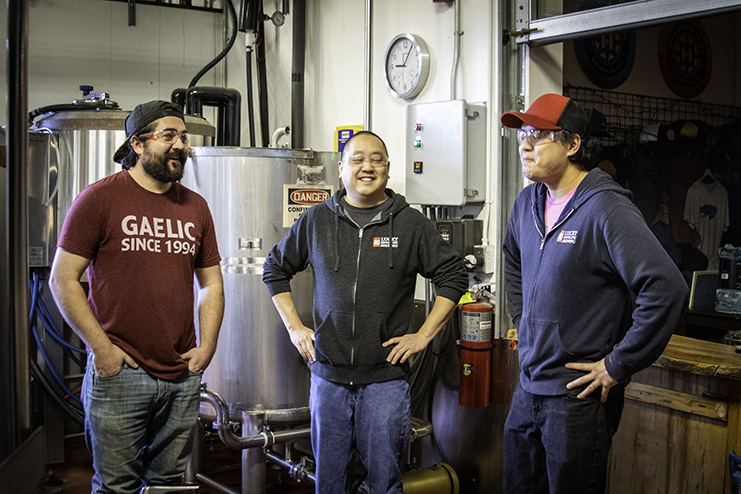 In celebration of the Year of the Metal Rat, Seattle brewery Lucky Envelope is releasing a Metal Rat Hazy IPA in collaboration with the Asheville, North Carolina-based brewery Highland Brewing.

Opened in 2015, co-founders and owners Barry Chan (head brewer) and Raymond Kwan (director of operations) intended to fully embrace their identities as Chinese Americans when they established Lucky Envelope Brewing.

“Early on there was some hesitation on our part because the Chinese community, the Asian community, wasn’t really known for beer,” Kwan said.

A look at the numbers behind the craft beer industry’s diversity polls validates their hesitation in creating their brewery, which was founded and anchored in their Chinese American culture and heritage. The Brewers Association released a report last summer which found that 88% of craft brewery owners are white.

But as Chan and Kwan have seen and proven to the rest of the craft beer industry, people embraced their “culturally inspired beer.” Besides their name to their logo and motto, Lucky Envelope has consistently utilized different ingredients that they’ve either found in their travels around Asia or the familiar tastes and flavors they grew up with.

Their collaboration with Highland Brewing came about after the discovery that Highland was also owned by Chinese Americans. Founded in 1994 by Oscar Wong, Wong’s daughter Leah Wong Ashburn now runs the business as the President and CEO. This year marks the first time Highland Brewing has celebrated Chinese New Year.

“The holiday is visually engaging and fun for all ages,” Ashburn said. “It brings together all the threads of craft, family, and culture, coast-to-coast.”

The collaborative beer, the Metal Rat Hazy IPA, features lotus hops in a nod to their shared Chinese heritage and will have hints of orange. In addition to the hazy IPA that will be released on Saturday, January 25, Lucky Envelope will kick off its lunar new year celebrations on Monday, January 20, with a tea house inspired beer day.

“We’ve kind of grown into our own identity—when you open up a brewery you kind of have to figure out who you are and what you do,” Chan said.

Lucky Envelope will additionally be offering their Mijaya Historic beer over the January 25-26 weekend. The Mijaya beer is one that the brewery has made for its previous Chinese New Year celebrations using a 5,000-year-old recipe.

“As we started getting feedback from the beer…we started to incorporate some cultural influences into the brewing philosophy and beermaking and generally just how we present ourselves to the market,” Kwan explained.

Those that pay a visit to Lucky Envelope over the January 25-26 weekend will be handed one of 88 envelopes containing a variety of giveaways.

Both Chan and Kwan recall celebrating Chinese New Year growing up. The holiday was one that revolved around food and family. When they got older and moved away from home, the people they celebrated changed but not the traditions.

“It became more of a celebration similar to what we do at Lucky Envelope. We’d invite friends and close neighbors over to our house and share some of the traditions,” Chan said.

The Metal Rat Hazy IPA will only be available on draft at Lucky Envelope’s Chinese New Year celebration which will happen both Saturday, January 25 and Sunday, January 26. T-shirts and stickers to commemorate the collaboration with Highland Brewing and to celebrate the new year will be available for purchase.

While the rest of the craft beer industry remains largely a white and male-dominated space, this collaboration pushes back against that image.

Ashburn expressed her excitement over their collaboration with Lucky Envelope and hopes that it will be the beginning of a new tradition for Highland Brewing.

“My hope is that beer fans feel the benefits of collaboration in creating a great beer with aspects of ethnicity and authenticity at the root of the story.”