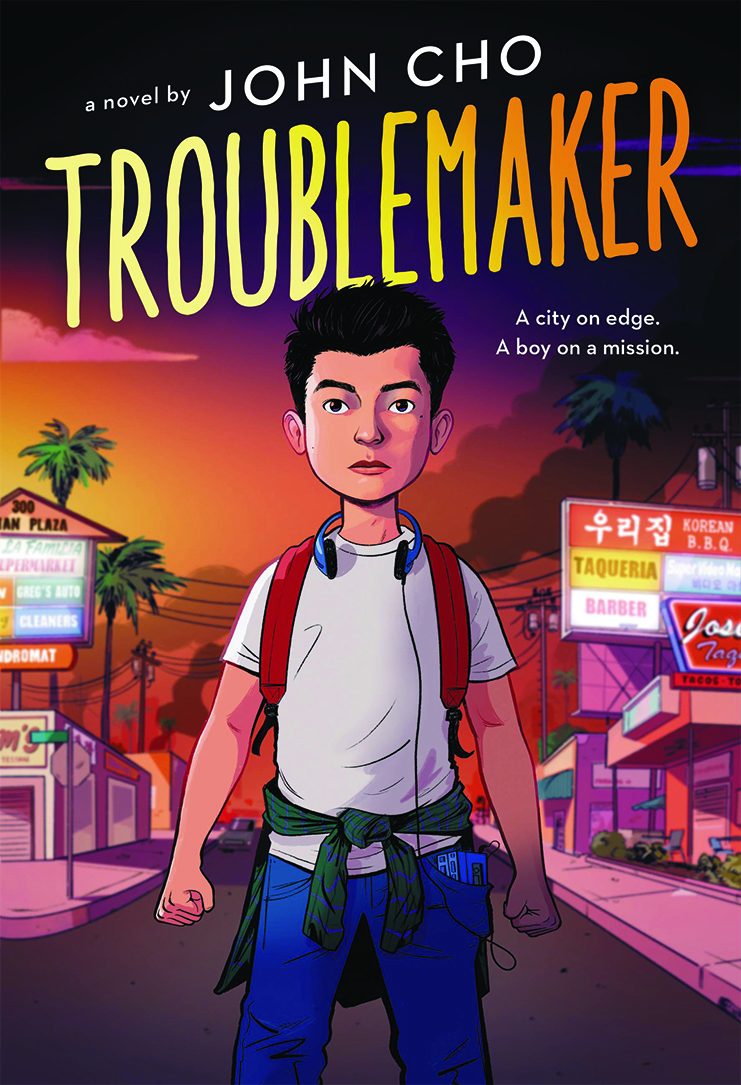 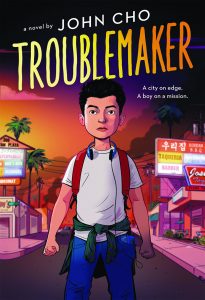 Cho lived in Everett for part of his young adult years. John remembers going to the local Fred Meyer, and while his parents shopped, he would visit the book section and read a chapter in the novel, First Blood. Every week while his parents were purchasing their weekly groceries, John would read another chapter. He has fond memories of living in the Seattle area.

Cho has an extensive film and television career. He has been in films such as Better Luck Tomorrow, Harold and Kumar Go to White Castle, Searching, Star Trek Beyond, American Pie, and many more. He has also been in numerous TV series — Cowboy Bebop, Selfie, 30 Rock, The Twilight Zone and The Exorcist. His writing collaborator is Sarah Suk who has written other novels such as Made in Korea and The Space Between Here and Now.

Jordan Park, a 12-year-old, is always in trouble unlike Sarah, his perfect sister, a junior in high school. As a Korean American kid, he cannot live up to the expectations of his parents, especially his father. Jordan picks poor friends and gets suspended from school for cheating on tests. He does not want to tell his parents about his suspension. He thinks he can prove to his family that he is not a bad kid.

The Park family lives in Los Angeles, and his father has a store in Koreatown. It is 1992 when race riots rock the city. Rodney King is beaten by four White police officers. Latasha Harlins is shot and killed by a Korean shop owner who says she thought the teen was shoplifting. The police found that Latasha had the money for the juice in her hand and was not stealing. Racial tensions are high.

Jordan and Sarah find themselves in this confusing and dangerous time. Jordan wants to help his father protect their store because the police do not do much for shop owners in Koreatown, but he can’t find a ride to the shop. His friend takes him part of the way, but then he leaves him at a neighborhood hangout. His sister worries and tries to find him.

In the end, Jordan learns a valuable lesson about guns from his father. He grows up a lot during that summer. This is a coming-of-age story of a young Korean American male and a portrait of his Korean American family. The dialogue pushes the story line forward and is a major element in creating an engaging novel.

Troublemaker provides an excellent opportunity for teachers and parents to talk about family relationships and how sometimes communications in the family get misinterpreted. The story emphasizes the dad’s love for his son though the son does not realize how much his father cares for him. Teachers can also have students talk about the racial conflicts between Blacks and Koreans, and police and communities of color. Though the story does not take on racial discord head on, it provides openings for educators to talk about the problems among communities of color. This book is extremely timely especially since there is so much anti-Asian hate in the nation today.

IE: Why did you write Troublemaker? What messages do you hope your readers take away from the story?

Cho: I hope readers will have a good time with the novel. It is about a 12-year old boy who is a troublemaker and gets suspended from school. The story begins on April 29, 1992, and the verdict from the Rodney King trial has been read. His parents are home, and they are worried about violence in South Central LA where they have a store. So the father decides to go to the store to board up the store for protection.

While he is doing this, the family is at home watching the news and gets anxious. The boy decides he is going to take the gun to his father for protection. He sneaks out of the house with the gun. It is a story about how he gets across Los Angeles on that night.

For kids, it is an adventure story. For adults, I hope it is an opportunity for parents to talk about difficult issues. Maybe the book is a good way to start conversations in families. It would also be an honor for me if teachers would use it in their classrooms.

Sarah Suk: When I was presented with the opportunity to co-write a middle grade novel that takes place during the LA riots with John Cho, I was immediately intrigued. I was drawn to both the collaborative nature of the project as well as the subject matter. The 1992 LA riots were something I grew up hearing a lot about, and the chance to explore that history more deeply in order to write a story about it for a new generation really spoke to me.

Rather than one takeaway, I hope that readers would be spurred on to have many discussions after reading Troublemaker. I would love to see this book lead to further conversations around topics such as justice, racism, and family bonds.

IE: Was this story about anything that happened to you when you were growing up? If so, which parts?

JC: There are many aspects of the story that have been floating in my mind. For example, I remember that I had a friend who played with his father’s gun with another kid afterschool. The friend nearly shot his friend. The bullet sailed past his head and hit the wall behind him. So that was something I was thinking about when I was writing the book.

When I was in 8th grade, I had two Sunday school teachers who invited me for a sleepover at their house. I was very awkward at that age. They were a couple from Arkansas. They took me to a movie, dinner, and in the morning, we went to a shooting range. They taught me how to shoot and load a pistol and a rife in a responsible way. I think they were trying to give me a ritual into adulthood and give me a sense of responsibility.

So all sorts of ideas are floating around in my head. For example, what a gun would mean to a boy of that age and what it means in America.

I asked my parents about the experience at a gun range, and they could not remember the incident. So I am not sure they were consulted.

IE: How did the title of the novel come about?

JC: The title came last. We went back and forth. We thought of Troublemaker late in the process because it describes everyone in the book. It certainly describes Jordan.

It is a slippery label. I think the term is often tossed around callously. I was also informed by the Model Minority Myth. Asian Americans are not supposed to be troublemakers, so it has many meanings for me. I think that is why I was attracted to this title.

Troublemaker is emblematic of that age when you are trying to define yourself and resisting labels.

SS: There are certainly aspects of the story that reflect my own personal experiences growing up. Navigating parental pressures, for example, and growing up as a child of Korean immigrants. In addition to these overarching elements, snippets of inspiration from real life were also woven into the story through specific scenes and details (which I won’t go into too much for spoiler reasons!).

IE: How does your novel tie in with the anti-Asian hate movement of today?

SS: I have many complicated feelings about this…what I can say is that it was a heavy experience, deep diving into records of 1992, watching documentaries and reading about the events of the riots, and then looking up into our present day world and seeing much of the same injustice unfolding before us. George Floyd’s murder, the Atlanta shootings (of Asian American women).

These were present-day realities at the time we were working on the novel (and still continue to be now), and it was devastating to see how little things have changed in the past 30 years. At the same time, so many great strides have been made by activists who have been working tirelessly for racial justice that I don’t want to say that nothing has changed. But the deep roots of systemic injustice are as deathly and horrific as ever, and I feel that many of the themes discussed in Troublemaker are very much relevant today.

IE: Will there be a sequel? If so, when and will it be about Jordan?