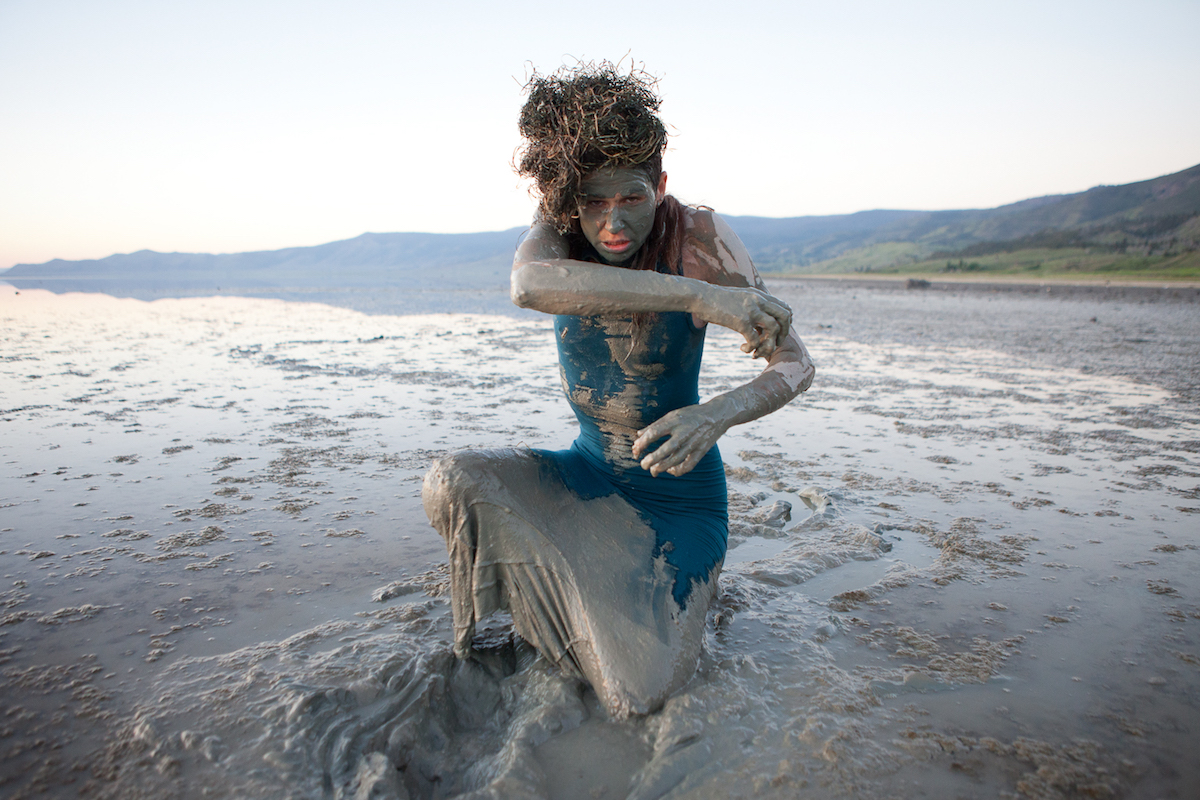 During early July, the DAIPANbutoh Collective will present its 9th annual Seattle Butoh Festival, featuring performances by eight DAIPANbutoh members and three guest artists. Butoh is a form of Japanese dance that developed after World War II as a “dance of darkness,” in direct contrast to Western forms of dance such as ballet and modern dance.

One of these Seattle Butoh Festival guest artists is local, a member of Degenerate Art Ensemble: Haruko Crow Nishimura will be presenting an excerpted piece called Skeleton Flower. “I am taking stories from my own life,” Nishimura said, “and weaving them together with three universal fairytales whose female protagonists overcame great opposition by putting their creative desires into action.”

For Nishimura, butoh has been an avenue toward healing. “It is an embodiment of voice and the human condition dealing with my difficult and at times violent upbringing which led to major breakdowns and years of depression,” she said, “and how through creativity, I have been able to not only survive, but also to create and share my imagination with others and how this has been transforming me in the process.”

A second guest artist, Mizu Desierto, hails from nearby Portland, Oregon. For Desierto, the Seattle Butoh Festival is an ideal fit. “I have had a relationship with DAIPANbutoh Collective and its various members over the last decade or so,” Desierto said. “As an artist who also presents other artists, often from the lineage of butoh, I am well aware of how challenging it is to do this work and am grateful to be invited to share my work for this year’s festival.”

The Festival lineup was especially appealing to Desierto. “I was also excited to be asked to share my work in an evening paired with Crow Nishimura of Degenerate Art Ensemble,” she said, “as we recently toured together and found our post-butoh aesthetics to be complementary to one another.”

Desierto will present a work entitled Death=Change. “The work is a meditation on love, loss, control and culture,” she said, “as I move between an ancestral pilgrimage to my southern Italian roots and a confrontation of contemporary isolation.”

The latter is a key theme for Desierto. “It is easy to become isolated in our own cities, spaces, and communities, and at the same time, one of the greatest gifts of the butoh lineage is the kind of global community that it instantly creates when we come together,” she said. “There is something about the kind of dancers, students, and audience, who are interested in and willing to confront the vulnerable, absurd and grotesque, that make me feel at home anywhere.”

The featured guest of the Festival, Mushimaru Fujieda, from Yakushima, Japan, will perform in Seattle as part of his tour of the northern hemisphere in which he will visit 14 countries over 100 days. He will perform Walking Butoh, which pays homage to his 45 years of performance. Fujieda is sharing this piece with Seattle audiences after first premiering it at the Sapporo International Butoh Festival in February 2017, and then presenting it at various locations in Japan, as well as in Hong Kong, Tel Aviv, Paris, Barcelona, Gdańsk and Mexico City.

DAIPANbutoh Collective’s Artistic Director Sheri Brown feels that Fujieda’s contribution to the Festival reflects the variety of local butoh expression. “Mushimaru is unique to butoh in that although he is from Japan, he does not derive from the two main ‘founding fathers’ of butoh, Tatsumi Hijikata and Kazuo Ohno,” Brown said. “Rather, he has derived his own unique movement style organically as an artist growing up in Japan with these influences in the ‘artistic ecosystem’ so to speak, but not directly teaching him.”

Brown also feels that Mushimaru’s background has influenced his performance impulses in unusual ways. “Mushimaru is a farmer when not dancing, and his dance is uniquely his own,” she said. “This cultivated sense of deep, often abstract, self-expression is at the heart of butoh. For this reason, essential butoh constantly evolves.”

Bolstering these special guests are the DAIPANbutoh Collective team, who handle all performance coordination, technical scheduling, media communications, contract negotiation, ticketing, archival work and liaison work with the Japanese community. “This is our biggest festival yet, with more offerings than we have ever given before,” said Brown.

Brown attributes this growth to the expansion of the Collective itself. “We have been able to expand to this level of complexity because of two main factors: experience gained from the past eight festivals and the awesome new addition this year of three new members to DAIPANbutoh Collective: Lela Besom, Erica Akiko Howard, and Shoko Zama,” Brown said. “Each of these ladies’ talents and energies have synergized potently with the original members.”

The members of DAIPANbutoh Collective will, in their various performances, explore themes as wide as dreams, caves, prehistory, and the concept of home. They will also participate in the First Thursday Art Walk with a Butoh Parade. The guest artists and collective members will also offer several workshops, as well as presenting a performance/installation piece by Ivan Espinos, a recent MA graduate of Performance Studies at NYU.

In the spirit of this continued cross-cultural exchange, DAIPANbutoh is also pleased to announce its own first international tour. “We have been invited to go to Santiago de Chile for the acclaimed Fibutoh festival organized by the Chilean group Ruta de la Memoria,” said Dhyana Garcia, DAIPANbutoh Collective’s graphic designer and fundraising coordinator.

With each of these performances, DAIPANbutoh hopes to share multiple aspects of the quintessential art form of butoh. “Through movement and voice explorations we invite others to speak,” said Garcia, with “our bodies allowing us to scream louder and clearer, not just with voice but with every cell in our body.”