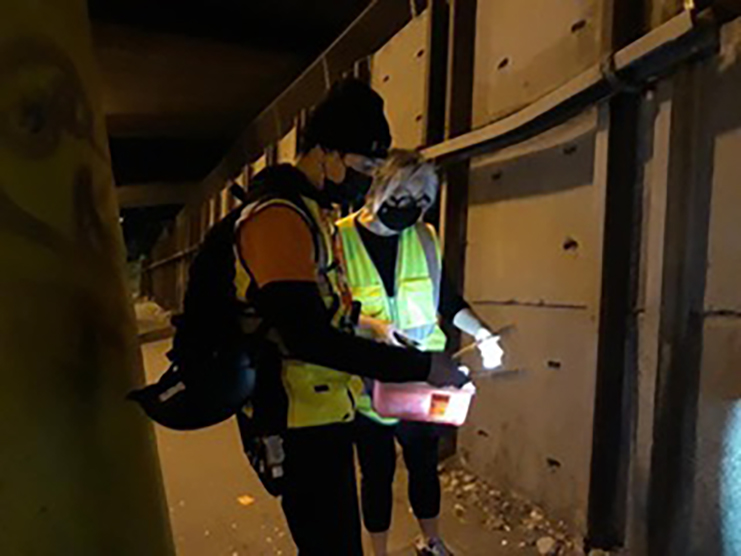 An eye-opening experience can be a good thing, but it’s not if you spend as much time in Seattle’s Chinatown International District as I have. I’m not talking about occasionally driving through the neighborhood to pick up take out from a local restaurant and then zipping off to enjoy your hot yummy meal at home, which is certainly a nice way to be supportive of struggling businesses. I am talking about spending two hours just walking on the streets of Japantown to Little Saigon, and zig-zagging on foot along the sidewalks of Chinatown. I have done this for months: hit the pavement once a week during the evenings with a group of dedicated volunteers half my age, the CID Community Walk. Many of the all-volunteer crew walking the streets of the CID in yellow vests engaged with the increasing number of unsheltered people making their home on the streets of one of the last historic ethnic neighborhoods in Seattle.

The unsheltered folks encountered by the CID Community Walk, have pitched their tents mainly under the freeway overpass along S. Jackson St. and S. King St. and have overtaken a community parking lot. Our group has distributed bottled water, snacks, socks and any number of care kits during these nightly walks to people that inhabit the encampments. What we’ve found during our interactions with this transient population is a real need for an organized effort by the City to provide services and to find a safe place for them.

These are neglected people living in deplorable conditions, scraping by day by day, all deserving of attention and health services. It is not a crime to be poor, to end up living on the streets from whatever unfortunate circumstances have brought them to that point. What is a “crime” is the City not seeing that the homeless are people, human beings. Not all that different than not recognizing that longtime residents, and owners and operators of ethnic businesses in the Chinatown International District are people too, both need and deserve the attention of the City.

The Seattle Chinatown International District is a neighborhood that has long been marginalized by the City. Decades ago, a freeway cut through the heart of the Asian neighborhood. Then the Kingdome and later two more stadiums were erected — none of these developments have truly benefited the neighborhood. Small ethnic businesses struggled to stay afloat during those years. Five years ago after the murder of community first responder Donnie Chin we saw the first wave of homeless encampments suddenly spring up. The CID back then faced serious health and safety hazards until the encampments were removed just before the Seafair parade.

The situation is worse now for the neighborhood. A combination of events since the start of 2020 has seriously impacted Chinatown ID. Racist attacks against businesses occurred at the onset of COVID 19 and continues today as people have avoided the area for fear of contacting the “Chinese Virus”, and then the shutdown happened. In late May as the Black Lives Matter protests began, demonstrators/rioters were funneled from downtown into the CID by the police, damaging neighborhood businesses further. Now locally owned businesses, having struggled during those times are having an even more difficult time because of the encampments — a real deterrent to anyone visiting the neighborhood to have to navigate their way through trash, needles and human waste. What I don’t see as much now in the neighborhood are Asian elders, families and little children out and about. Not a healthy situation for residents, businesses and workers who are employed in the area. And not a healthy situation for the unsheltered living in the encampments either.

My question is, WHY? Why is the Chinatown International District, a neighborhood already impacted from the effects of the pandemic and racism, not receiving help from the City to deal with this growing encampments currently in the CID? This would not be happening in affluent white neighborhoods like Laurelhurst, Magnolia or Madison Park.

The growing encampment / health hazard situation in Chinatown International District is dire. If businesses, and restaurants are forced to close down because no one wants to deal with the conditions in the CID it will no longer be a neighborhood that is the cultural home to the Asian community. The real eye opener is the inequity — how a prosperous city like Seattle can turn a blind eye to the needs of the marginalized impoverished unsheltered population as well as to continually treat the long neglected CID as a second class neighborhood.

I am asking Mayor Durkan and City Council members to join us on a walk in the CID. I believe that working together we can find a balance, work on a real plan for a solution that benefits both an ailing Asian historic neighborhood and the unsheltered population who need real services. Lip service is over. We need the City to respect the Chinatown International District and give our neighborhood the attention and care it deserves.