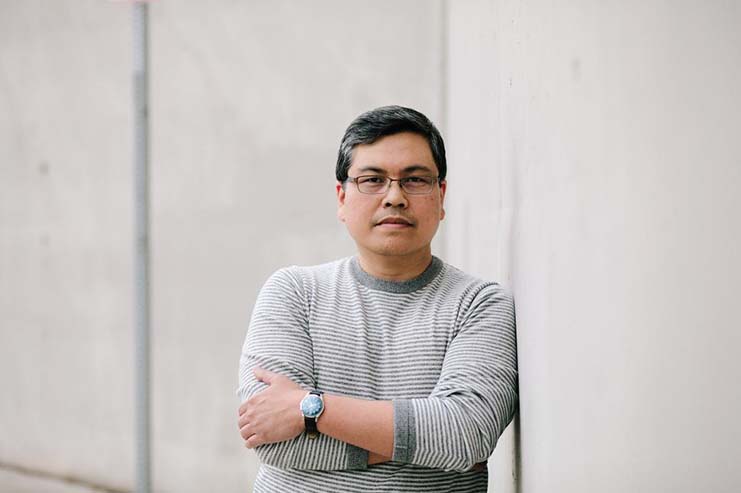 With poetry by Jane Wong and Rick Barot.

April is National Poetry Month and in introducing our feature on it, I started to grapple with the notion of what poetry is or why it matters. In a nutshell, I think poetry is a way for us as individuals to fashion our own unique language to express things we feel that we are not able to express in any other way. As individuals, we all invent our own script to communicate what we have to say to others.

The poet Mark Doty, in a talk entitled “Tide of Voices: Why Poetry Matters Now” (go to poets.org for complete speech), thinks the way poets say things in their own language matters. He quotes the poet Robert Lowell who addresses sickness by not just saying, “I am sick” but instead uttering “I hear my spirit sob in each blood cell.” And he cites the poet Sylvia Plath who describes what it feels like to have a fever this way – “I am a lantern-//My head a moon/ of Japanese paper. My gold beaten skin/ infinitely delicate and infinitely expensive.”

Poetry is an alchemy of words we conjure up from our own experience. In our poetry feature, we include the poems of local poets Rick Barot and Jane Wong here. I will leave you with a couple quotes by writers on poetry.

“A poet’s work is to name the unnameable, to point at frauds, to take sides, start arguments, shape the world, and stop it going to sleep.” – Salman Rushdie

“Look out and look backward at our world’s history and our world’s poetry. You will see that the story we are living now is an ancient one. It has been lived before but feels new to us in this present existence. If we open the books, we can see this already happened, in different guises, with alternative leaders and varied populations. I think it will always be our challenge to create art undaunted by systems that try to suppress the wilderness of the mind.” – From an interview with Tina Chang entitled “A Complex Collusion of Ourselves” by Theresa Sullivan. (Go to garrisoninstitute.org to read the full interview.)

Hope you enjoy our celebration of National Poetry Month. Words do matter and so does the vessel of poetry to carry it across distant seas.

I Put on My Fur Coat

And leave a bit of ankle to show.
I take off my shoes and make myself
comfortable. I defrost a chicken
and chew on the bone. In public,
I smile as wide as I can and everyone
shields their eyes from my light.
At night, I knock down nests off
telephone poles and feel no regret.
I greet spiders rising from underneath
the floorboards, one by one. Hello,
hello. Outside, the garden roars
with ice. I want to shine as bright
as a miner’s cap in the dirt dark,
to glimmer as if washed in fish scales.
Instead, I become a balm and salve
my daughter, my son, the cold mice
in the garage. Instead, I take the garbage
out at midnight. I move furniture away
from the wall to find what we hide.
I stand in the center of every room
and ask: am I the only animal here?

Jane Wong is a recipient of a Pushcart Prize, a U.S. Fullbright Program grant, a Hedgebrook residency, the James W. Ray Distinguished Artist Award and others. She is the author of Overpour from Action Books. She has a forthcoming book entitled How to Not Be Afraid of Everything forthcoming from Alice James Books. She is an Assistant Professor at Western University. “After Preparing the Altar, the Ghosts Feast Feverishly”, her first museum solo exhibition takes place at Frye Art Museum from June 1 – Sept. 1, 2019. 704 Terry Ave. 206-622-9250. The above poem originally appeared in American Poetry Review.

of history, the matchstick lit in the black seam of time.
Or, no, her story is separate

from the whole, as distinct as each person is distinct
from the stream of people that led

to the one and leads past the one. Or, her story
is surrounded by history, the ambient spaciousness

of which she is the momentary foreground.
Maybe history is a net through which

just about everything passes, and the pieces of her
story are particles caught in the interstices.

Or, her story is a contradiction, something ordinary
that has no part in history at all, if history is

about what is included, what is made important.
History is the galleon in the middle

of the Pacific Ocean, in the middle of the sixteenth
century, swaying like a drunk who will take

six months to finally reach his house.
She is on another ship, centuries later, on a journey

eastward that will take weeks across the same ocean.
The war is over, though her husband

is still in his officer’s uniform, small but confident
among the tall white officers. Her hair

is marcelled like a movie-star’s waves,
though she has been too sick with the water’s motion

to know that anyone sees her. Her daughter is two,
the blur of need at the center of each day’s

incessant rocking. Here is a ship, an ocean.
Here is a figure, her story a few words in the blue void.

Rick Barot has published three books of poetry with Sarabande Books. He books have received numerous awards and he has received fellowships from the Guggenheim Foundation, the National Endowment for the Arts, Artust Trust and many others. He is a poetry editor of the Rainier Writing Workshop, the low-residency MFA in Creative Writing Program at PLU. His latest book of poems entitled The Galleons will be published in Spring 2020 by Milkweed Editions. The book is heavily informed by his grandmother’s death at 92 and by the long reign of Spanish colonial rule over the Philippines where the poet was born. The poem published above originally appeared in Poetry, a literary magazine.