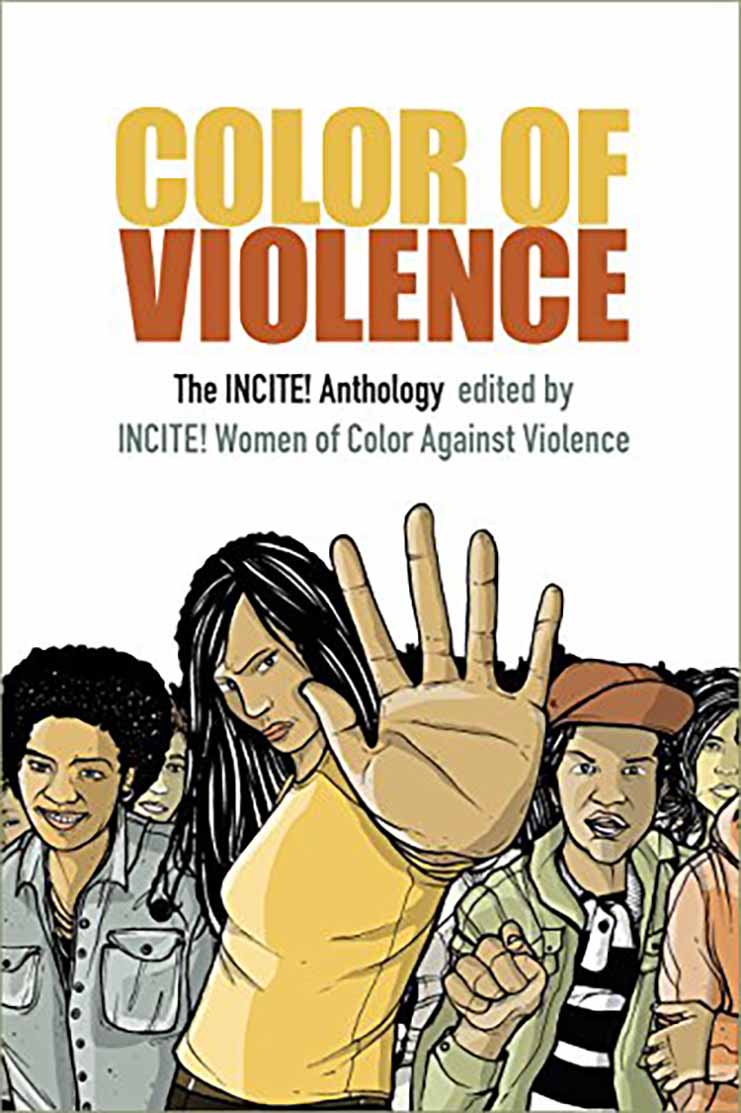 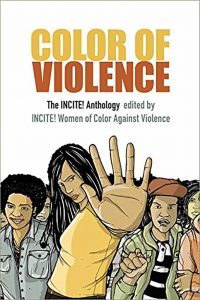 Published in 2006 by INCITE! Women of Color Against Violence, Color of Violence: The INCITE! Anthology features essays, poems, and stories that center gendered, racialized, and sexualized violence inflicted upon Black women, indigenous women, women of color, and trans- and gender-non-conforming persons. Providing multiple frameworks for thinking about how approaches to violence must “always challenge the violence perpetrated through multinational capitalism and the state,” the anthology grew out of a conference held by radical women of color in 2000.

After organizing “The Color of Violence: Violence Against Women of Color” conference at University of California, Santa Cruz, INCITE! held follow-up conferences in Chicago and New Orleans. With goals to transcend liberal politics of inclusion and actually develop strategies that address violence against Black women, indigenous communities, women of color, queer, and trans- and nongender-conforming persons, INCITE! recognizes that their organizing is dynamic and requires a constant recentering of communities that face intersections of oppression. To answer the question, “what would it take to end violence against women of color?” INCITE! guides readers to understand how intersections create multiple systems of oppression and violent worlds.

The anthology is sectioned off into three parts: “Reconceptualizing Antiviolence Strategies,” “Forms of Violence,” and “Building Movement.” Though the central goal of the book is consistent throughout, the pathway to reach a world without violence against women, and what that world looks like, manifests in different ways. In “The War Against Black Women, and the Making of NO!” Aisha Simmons describes how the camera becomes her activist tool, as she walks readers through the creation of her feature-length documentary on rape in African American communities. Simmons highlights the intersections of violence against Black women, the potential of testimony for educational work, and activism for self-healing. Similarly, Andrea Ritchie urges readers to recognize state violence against women of color at the hands of military, law, and immigration enforcement officers in her essay, “Law Enforcement Violence Against Women of Color.” Ritchie’s essay is necessary in recent conversations around police violence and abolition, as she centers gender and race in her analysis of police brutality against women of color and imagines new ways of community-based responses that don’t rely on the legal system. Sarah Deer’s essay, “Federal Indian Law and Violent Crime: Native Women and Children at the Mercy of the State,” provides a powerful overview of how federal U.S. laws have failed to protect indigenous women and children. For Native communities fighting settler colonialism, separation of sovereign power is necessary to anti-violence strategizing. Deer demands accountability from federal and state systems and the full restoration of power to indigenous communities to respond to crimes of violence. Haunani-Kay Trask also demands native sovereignty in her essay, “The Color of Violence.” The nuclearization and militarization of native land has demonstrated that the United States is a “white country for white people,” and Trask argues that those who did not voluntarily join the U.S. do not seek to be included in its multicultural narrative.

This call to sovereignty provides an interesting contrast with Emi Koyama’s suggestion of “hyper-institutionalization.” In “Disloyal to Feminism: Abuse of Survivors within the Domestic Violence Shelter System,” Koyama critiques how domestic violence shelters criminalize and refuse services to sex workers and transgender peoples, denying shelter to those who do not fit within certain criteria of women and, as a result, are undeserving of protective services. Arguing that further institutionalization can “compensate for the negative impact of one-sided institutionalization,” Koyama argues that we must exceed a utopian, individualistic feminist consciousness to demand structural change. The anthology argues that we must consider the interconnectedness of these experiences, not to argue that they are equivalent or the same, but to remain vigilant and conscious of oppressive systems that work alongside each other and recognize the potential in women of color feminism to attend to the ongoingness of white settler colonialism and heteropatriarchy.

The challenge of any anthology is coverage; however, readers are reminded that Color of Violence is not meant to be all-encompassing. Instead, the book urges us to continue to be critical of who has been left out of anti-violence and feminist organizing. Nadine Naber, Eman Desouky, and Lina Baroudi’s essay, “The Forgotten-‘ism’: An Arab American Woman’s Perspective on Zionism, Racism, and Sexism,” performs a critique of antiviolence movements that have denied Arab and Arab American women the space to contribute to “multiracial movements for social justice.” In their overview of how transnational radical women of color organizations have perpetuated Zionism, the writers urge for consistency in feminist critiques of racism and sexism.

An invaluable source for those who seek to understand how different forms of gendered, racialized and sexualized violence work alongside another, Color of Violence guides readers to recognize patterns and connections between imperialism, settler colonialism, and heteropatriarchy. Rather than collapsing difference to unite under a limited framework of womanhood, Color of Violence traces the heterogenous histories and lived experiences that have led to INCITE!’s formation. Much of the labor, of course, falls onto Black women, indigenous women, and women of color. A large number of the essays contain ethnographic material, interviews, or a weaving of “daily realities,” as we see in Dana Erekat’s short piece, “Four Generations in Resistance,” demonstrating the amount of gendered emotional labor invested within ethnographic and academic research and in organizing and building movement, as described by Communities Against Rape and Abuse, INCITE!, and Sista II Sista. But as Neferti Tadiar writes, “we need living memories, living histories, as openings into other futures.”

The global pandemic only makes it easier to see the racial and gendered violence of our systems, particularly anti-Black state violence, terrifying conditions in prison and detainment centers, racist immigration laws, and anti-Asian hate crimes. By looking to grassroots organizations, activists, and cultural producers in Color of Violence, we can recognize how this violence is historical and ongoing, and see how Black women, indigenous women, women of color and trans- and gender-non-conforming person have organized and led movements to resist. Despite being published over a decade ago, Color of Violence provides readers with important frameworks to continue resisting, urging us to imagine new ways to end violence against women.