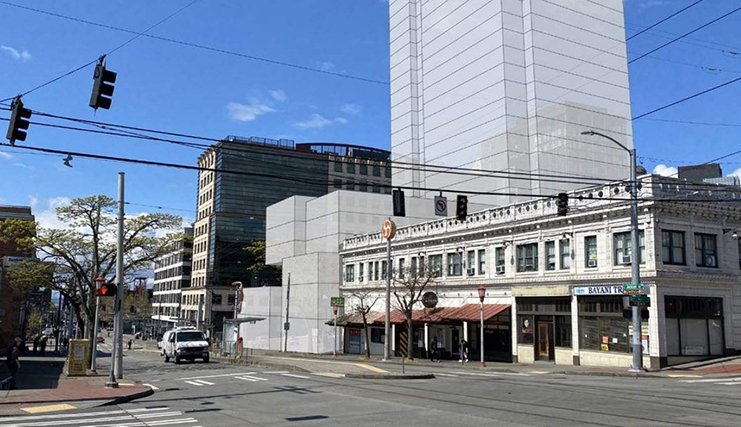 It would be the Chinatown International District’s tallest building. Developers presented plans for Fujimatsu Village, a 29-story residential and retail project, before the International Special Review District (ISRD) board on June 14.

The project would be built at 500 South Jackson Street, currently a surface parking lot. The developer is Da Li Fujimatsu LLC – a partnership of the Moriguchi family of the Uwajimaya grocery chain, which has owned the property since the late 1990s, and Da Li Development USA, a branch of the the Taiwan developer Da Li Development. Also on the team is Weber Thompson’s Architecture Design Studio.

It’s not the first partnership between Da Li and the Moriguchi family. Kitty-corner to the Fujimatsu site is the 17-story Koda condominiums. Family patriarch Tomio Moriguchi sold the Koda site to Da Li for $5.5 million in 2016, the Daily Journal of Commerce reported.

“This project is a legacy project for my family,” said Moriguchi during the ISRD briefing, which was conducted both virtually and in person. Moriguchi’s children and grandchildren, he said, will be part owners. Fujimatsu Village is named after Moriguchi’s father, who came from Japan to Tacoma in 1923, where he founded the precursor to Uwajimaya five years later. Fujimatsu later started Uwajimaya in Seattle after the family came back from incarceration during WWII.

Two previous versions of the project were presented before the ISRD board, including one with a 200-room hotel. But the latest proposal just consists of housing (some mix of market-rate and below market-rate, according to the developers), and retail. The project will include “flexible” retail spaces – space that can accommodate a variety of sizes of retail. It might include an indoor market hall with small bays for local stores and restaurants.

The ISRD board is charged with reviewing the exterior appearance of new buildings and other public spaces in the CID. It was established to “promote, preserve and perpetuate the cultural, economic, historical, and otherwise beneficial qualities of the area, particularly the features derived from its Asian heritage.”

For community outreach, the developers hired Eco-Ready LLC, run by former City Councilmember David Della. The team conducted community engagement, virtual meetings with small business owners and organizations including SCIDpda, InterimCDA, Vibrant Cities, Densho, JACL, CISC, KOBO. These organizations did not necessarily endorse the Fujimatsu project; a representative of Densho wrote to the International Examiner to clarify that Densho did not endorse the project.

According to the briefing, the team heard “unanimous support of our preferred direction in regards to the tower location, general ground floor program layout, and massing direction.”

“Many support the decision to build high-density housing in the neighborhood to support a healthy mix of residents that will support local businesses, and appreciate that there will be some component of affordable housing in the project.”

However, like other high-rise projects proposed in the neighborhood, the Fujimatsu project is controversial, and received some concerned public comments during the ISRD briefing.

Meilani Mandery, who lives and works in the CID, accused Da Li of profiting off the neighborhood with the project. “This does not serve the CID,” Mandery said. “Twenty-nine stories is too tall. It shouldn’t even be up for discussion.” Mandery said the CID is a low-income neighborhood at high risk of displacement, and needs more affordable housing instead of projects like Fujimatsu Village.

Max Chan, a former resident and longtime CID community member, expressed concern about how the large project would impact the long-term affordability of the neighborhood. “The CID is more than just businesses and tourist destinations,” Chan said. “Could the average resident of the neighborhood afford housing in this building? Depending on the answer, does that indicate for you whether this is for the community?”

Briefing materials for the project suggested it could improve public safety in the neighborhood: “Hundreds of new residents and patrons of retail shops will bring eyes on the street, and with that, safety,” according to the briefing overview presented to the ISRD board.

Pui Leung, another supporter who works nearby, said the project would bring vibrancy to the area, and that the neighborhood should move forward with more development. “The area cannot survive by just one type of housing,” Leung said.

The height of a proposed building, pricing of units, and proportion of affordable housing are not in the purview of the ISRD board. Still, board member Lizzy Baskerville encouraged the developers to demonstrate more community engagement. “There is a wide variety of opinions about the project,” she said.

Board member Ming Zhang asked the developers for more data on the shadows cast by the building, and for the developers to come back with more information on addressing the concerns of people opposed to the project.

John Stout of Weber Thompson acknowledged during the briefing that the tower is large in the neighborhood context, but he said it isn’t particularly large in the context of the downtown area.

The Board took no action during the June 14 briefing, but will vote to approve or deny the complete application for the project at a future date.

According to the developer’s briefing, they plan to gather more community input before the next ISRD briefing. At that meeting they hope to gather feedback from the board on designs for the tower, floor plans and other details.

Update: The image that was originally published with this piece showed the tower massing for the Fujimatsu Village project on the south side of the building. It was one option the design team considered, but not the ultimate proposal the team presented before the ISRD board, and was not the option the board favored. The image has been replaced with the rendering the team presented to the board, showing the tower on the north side of the building. This proposal was the one the ISRD board supported during the June 14 meeting.

Correction: This article originally misspelled Meilani Mandery’s last name and has been corrected.

Update: This article has been updated to clarify that Densho did not endorse the Fujimatsu project, according to a representative of the organization.