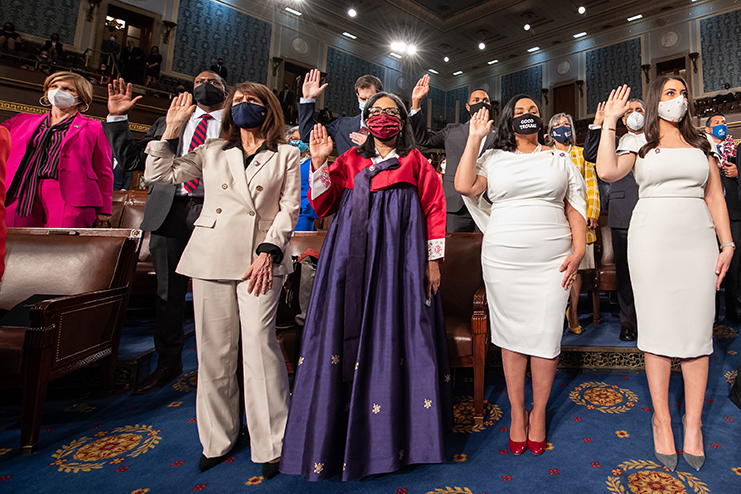 When Rep. Marilyn Strickland (D-WA) became an international sensation as the first member of Congress to take the oath of office wearing a hanbok, she did it to honor her mother and heritage.

But Strickland didn’t just surprise the world. She surprised her mother, as well.

Strickland, the former Tacoma mayor who represents Washington’s 10th congressional district (Tacoma, Lakewood, Olympia), was sworn in on Jan. 3. She was one of three new members of Congress who became the first Korean-American women ever to become members of the U.S. House of Representatives.

And she did so in style, adorned in the traditional Korean ceremonial attire usually worn by children on their 100th-day and one-year birthdays, and by adults for big occasions, like graduating or getting married. Or, taking the oath of office as a member of Congress.

It was a move no one saw coming.

“The decision to wear the hanbok for my swearing-in wasn’t something that we told anyone about,” Strickland said in a recent interview with the International Examiner. “Everyone who knew me knew that the swearing-in was going to take place on television, but it had taken a while because it was a Sunday night. And so we’re kind of waiting around, and then finally, the ceremony took place. And except for my staff here in D.C., no one knew what I was wearing. And so it was a very big surprise to people.”

Strickland, who was born in Seoul in 1962 and is of Korean-American and African-American descent, wore the hanbok partly to pay tribute to her umma, who grew up in Korea during the Japanese occupation and Korean War.

“I just wanted my mom to be able to spot me in this crowd of people,” she joked, “and also to send a message about my cultural heritage. But also, I think it was so important, especially given coming off the previous administration, that we wanted people to know that the House of Representatives is the people’s house and belongs to all of us — even those of us who weren’t necessarily born in the states and represent the AAPI community.”

Due to COVID restrictions, her mother could not attend, and was back home watching the proceedings on TV, with her pastor.

“Clearly, she was very excited to see me wearing (the hanbok),” Strickland said. “It was something that was very special to her, acknowledging her and our cultural heritage. But also, too, a sense of pride.”

Strickland said she had been in communication with her mother right up until the moment she took the oath. However, it wasn’t until she was on TV that her mother knew she was in a hanbok.

“We kept waiting for when the swearing-in ceremonies would take place. So I would call her and say, ‘OK, OK, I’m gonna go on in about 30 minutes,’ and it’s like, ‘OK, we’ll wait another 40 minutes.’ And so we kept trying to time it,” she said.

“And then finally, when it happened, she was very excited. And her pastor was over at our house at the time, so he was just texting me all the time, taking pictures of the TV screen. And my friends were sending me photos that they had taken as they were watching the TV. It was really funny.

“She had no idea. And the first question she asked me was, ‘Why did you wear that?’ And I mean, not in a negative way. But like, what prompted me to do that? And so I explained to her why I did it, and she was very happy and very proud.”

While her mother had no idea her daughter would honor her like this, it was Strickland who had no idea the hanbok would create such an international buzz.

“It had an impact that was far, far, far greater than I expected,” she said. “I remember some of the reactions that my staff told me about on social media — people were like, ‘Oh, my god, there’s a hanbok on the House floor.’ And so just the reaction was very, very — it was a moment of pride.”

Following the swearing-in, Strickland received an outpouring of interest. Someone on the East Coast created and sent her a glass figurine of a girl wearing a hanbok.

“People were sending me emails and letters and even posting on social media, saying they were curious, teary-eyed about it,” she said. “It was very emotional for a lot of people.”

“She was on a meeting with the Georgia state Democrats,” Strickland said, “and this was right after our swearing-in. She said there was a woman and her daughter, and the daughter was wearing a hanbok in this Zoom meeting, because she saw me wear mine on the House floor. That story just really resonated with me — it’s so sweet, right? And even to this day, when I have Zoom meetings with officials from Korea, or when I go to events, that is the first thing that comes to people’s minds. Whenever they mention that, they talk about how proud it made them, and they thank me for doing it.”

Today marks the 200-day mark for Strickland’s term. One of her legislative victories during these first 200 days was passage of the COVID-19 Hate Crimes Act, which President Biden signed into law in May. Strickland was an early co-sponsor of the bill, which is a response to the recent rise in anti-Asian violence, and which had bipartisan support in both chambers.

Strickland, who is one of Congress’s few joint members of the Congressional Asian Pacific American Caucus (CAPAC) and the Congressional Black Caucus (CBC), says a great benefit from this experience with the hanbok is it’s given her the chance to help educate America about Korean culture.

“We know that we’ve gone through this whole rise in Asian hate crimes, and passing the hate crime bill was really important,” she said. “But I remember talking to my fellow members of the CAPAC caucus about how so few people know the history about Asian Americans, that we’re not a monolith, and the histories of our individual countries and the contributions we make.

“And I tell folks that most people don’t know much about Korea, and what they read about — North Korea, and maybe the TV series M*A*S*H from the ’70s. So they don’t have a full history there. A dynasty, the occupation, and the country being torn and half. There’s a whole bunch there that most people know very little about.”

For Strickland, passage of the COVID-19 Hate Crimes Act was personal. As violence has proliferated over the past couple years in the U.S., this new law creates official capacity at the Department of Justice to ensure that hate crimes are taken seriously. And, remember, Strickland’s swearing-in came just days before the insurrection at the U.S. Capitol.

“It’s real. I have been called every racial slur — that has nothing to do with being Korean, by the way, but it was a racial slur about being Asian,” Strickland said. “And even just some of the xenophobic, anti-Chinese rhetoric that you hear coming from a lot of places. It’s one thing to oppose the actions of the Chinese government, but to just say that all Chinese people are this or this is just — it hurts all of us of API descent.”

What would Strickland say to the API folks out there who might be struggling and experiencing that hate and bullying?

“Now is the time to speak up. Now is the time to ask our friends about what it means to be true allies,” she said. “For a long time, too, people have stereotypes about our community. And again, we’re not a monolith, but speaking out when things happen, making our voices known, being present. I think sometimes we’re just overlooked and erased. And we have to make sure that when we’re talking about anything, whether it’s social, political, cultural, that we are at the table and our voices are heard.”