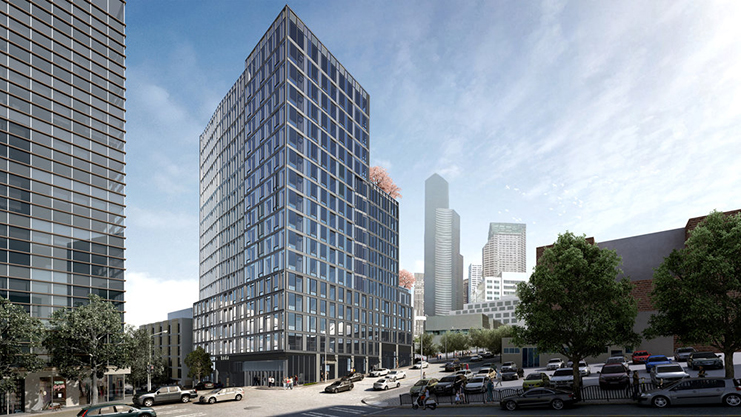 Koda, a proposed 17-story condominium project slated to be built on top of a parking lot next to Hirabayashi Place, is a significant step closer to being built. On January 22, Koda’s developers were issued a certificate of approval for final design by the International Special Review District (ISRD) Board, which regulates new constructions in the Chinatown International District (CID)  with the goal of preserving the CID’s Asian American characteristics.

A handful of people spoke against the project during public a comment period. For at least a year, the project has consistently been opposed by some during ISRD meetings.

“I cannot afford a unit in Koda, and neither can the other young people that I know whose parents are immigrants,” said Steven Sawada, a member of the CID Coalition (or Humbows Not Hotels), during public comment. “We’re not trying to stop growth, we’re trying to preserve what we have. This is not doing that.”

The project, from Da-Li Development USA, already had the go-ahead from the ISRD Board to work on final design. The Board approved its use of the project as a condominium project in October 2018 after preliminary design review.

The approval for most of the final design on January 22 marked the end of roughly two years of meetings before the Board.

Promotional materials for Koda advertise its location in historic Nihonmachi (Japantown). During a final briefing before the ISRD Board, representatives from Koda described planned design elements that pay homage to Japanese culture. One of these is a public art installation. During the briefing a representative from Koda suggested a sculpture of a suitcase, to honor the incarceration of Japanese Americans during WWII, as one idea.

These plans drew criticism from some who spoke against the project during public comment. “Who wants suitcases when that’s such trauma to our generations and our family?” said Sawada of the CID Coalition. “To think that that was the first idea that you had is just bananas to me.”

One man said: “The proposed designs with regard to signage, tea-house inspired windows, and an LED cherry-blossom display that one can only see when they are directly underneath the display does not honor this community but cheapens it and tokenizes it.”

Nina Wallace, a member of the CID Coalition, said: “Just having some kitschy, tokenizing elements that you brought over from Japan does not speak to the Japanese American experience and to the history of this neighborhood.”

Betty Lau asked if the signage, proposed to be written in Japanese katakana lettering (usually used for foreign words), be instead rendered in kanji, for consistency — if koda is originally a Japanese word. On Koda’s website, the word “koda” is described as “at once a flowering tree found in the Asia Pacific region, as well as a word for ‘friend’ in several Native American dialectics.”

Others brought up concerns about the affordability of the units, and whether it is appropriate for the neighborhood.

These issues were not part of the ISRD Board’s review process, as they fall outside its purview.

“The board does not have jurisdiction over affordability levels,” said Rebecca Frestedt, ISRD Coordinator for the Department of Neighborhoods, something she’d echoed at several previous ISRD meetings related to large market-rate development projects.

After a few comments opposing the project, Frestedt reminded the public that decisions about what types of projects can be built in which parts of the city are “embedded in the land use code. Changes to that code are dictated through City Council action.”

Wallace of the CID Coalition criticized the Board’s narrow focus, saying that if these issues constantly to come up during meetings, “the process isn’t working.”

Leslie Morishita spoke against the project on behalf of InterIm Community Development Association (CDA), where she works as real estate development director. She acknowledged that InterIm’s opposition is for reasons outside the Board’s purview. InterIm is calling for the ISRD Board to expand its purview to include equitable development criteria, and the cumulative impacts of speculative, high-rise developments.

“Through observing the Koda project progress over the last year plus, it seems to us that they see this ISRD process as simply a bureaucratic hoop to jump through before they can build their building – a game of words and smoke and mirrors,” Morishita said, reading from a statement.

“For us, this is not a game. This is our community, our culture, our history, our hope and our responsibility to our API pioneers who built this community in the face of racism, and immeasurable hardship and sacrifice.”

On behalf of InterIm, Morishita asked the developers to have a community-oriented process for creating public art, and to share its rooftop with InterIm’s Hirabayashi Place, which she said the Koda “building will have a direct negative impact on.”

Two people spoke in favor of the project, including Tomio Moriguchi, retired CEO of Uwajimaya.

“I think people that move in here will be tax-paying people, they’ll shop, and I think it’ll be good for the community,” Moriguchi said.

There was some hesitation from ISRD Board members before voting to approve the final design. Board member Sergio Legon Talamoni suggested the Board wait until the community could provide more input into public art and design of the sign, “especially since those elements would be place-making elements.”

Talamoni worried about the Board imposing its own design ideas on something that would have an impact on the community. “Me personally, I don’t know katakana, I don’t know kanji, and so for me to suggest one way or the other just wouldn’t be appropriate,” Talamoni said of final design of the Koda sign.

Talamoni encouraged the public to engage with the developers and suggest what they want to see, so that the Board can try to find a middle ground.

Before voting, Board member Stephanie Hsie emphasized the value of the public continuing to engage outside of the ISRD process.

“There are other places, platforms and community gathering that needs to happen to address a lot of the larger issues that we hear every time,” she said. “Because we don’t address them, doesn’t mean that we’re not aware of them or that we don’t hear you. I think it’s important that you come here and share your opinions regardless of what we have purview over.”

Board members hesitated slightly before making a motion to approve final design for the project, but the motion passed unanimously.

Frestedt noted that more development projects are coming to the neighborhood, and encouraged the community to participate in the process.

“We’ve seen a real increase in the amount of community input on projects, and I think it really does inform the board,” Frestedt said. “These comments continually come up, and it does matter.”

The ISRD Board issued a certificate of approval for final design of materials, finishes, colors, landscaping, right of way improvements and the plan for a sign outside the building. It did not issue approval for public art planned outside the project, and the actual signage graphic. For these, representatives from Koda will need to appear before the Board again.

“The International District is one of Seattle’s most coveted neighborhoods given the historic significance, rich culture and conveniences afforded to residents,” said Dean Jones, President and CEO of Realogics Sotheby’s International Realty, the firm representing KODA, in a statement published on Koda’s website. “KODA offers attainably priced homeownership opportunities where owning a car is an option rather than a requirement.”