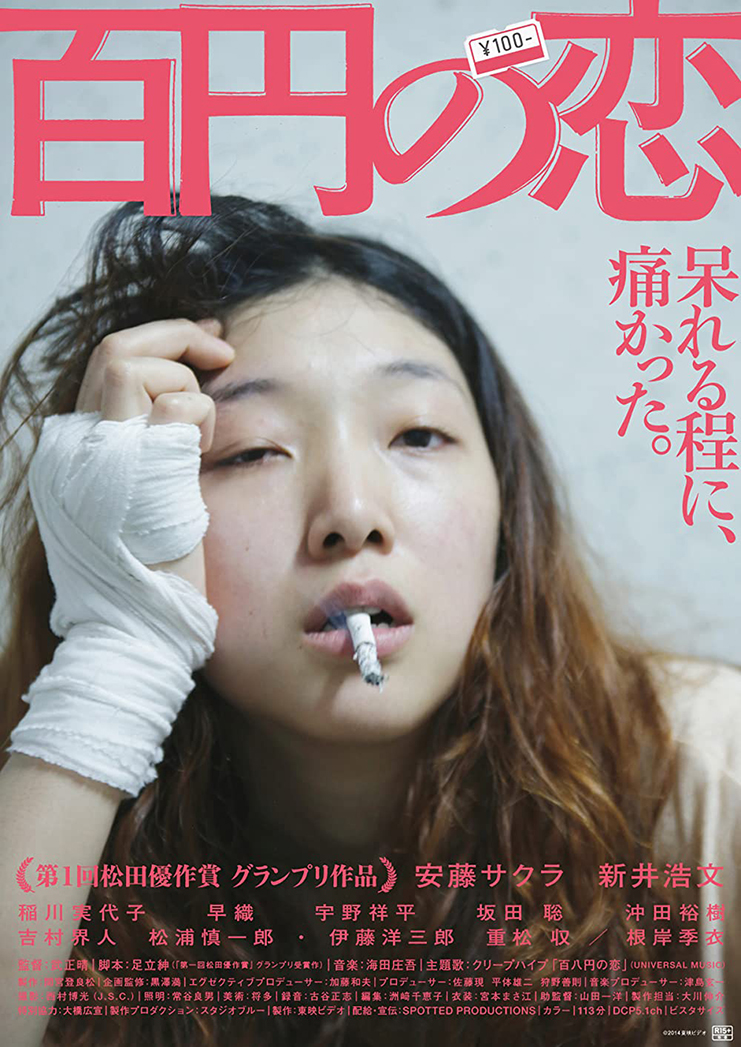 100 Yen Love directed by Masaharu Take shows a side of Japan that most audiences aren’t privy to. In the opening of the film, 32-year-old Ichiko sits at home, smoking in front of her nephew in her pajamas, eating chips, playing videogames, and overall being a human gremlin. Her mother and sister work on the ground floor in their family’s bento shop. But Ichiko isn’t that much of an anomaly in her environment. Almost everyone we’re introduced to is a little bit rude, a little messy.

Ichiko regularly makes trips to a nearby 100 Yen store. After a fight turns physical with her sister, she makes the trip again for some late-night chips, but this time, she passes a boxing gym, and stares into the window, intrigued by one person in particular, as he trains. At the urging of her mother, she moves out her of parents’ house and gets a night shift position at the 100 Yen shop. We’re introduced to a number of odd coworkers, all misfits in their own way, including Noma, a desperate and sleazy middle-aged man, and Ikeuchi, an ex-employee who comes by the shop every day and helps herself to the expired food.

It turns out the boxer, Yuji, who so intrigued Ichiko in the beginning, is known as the Banana Man at the store, on account of how many bananas he buys. The biggest perk for Ichiko is being able to pass by the boxing gym each day and glimpse Yuji in training. The second time Yuji comes in, he buys 10 bananas. He doesn’t have cash but gives Ichiko a pair of tickets to his upcoming match. For a dollar store, tickets to an amateur fight hardly count as payment, but for Ichiko, it means the world.

Ichiko and Noma go to the match, where they both watch Yuji lose abysmally against his opponent. Despite this, Ichiko is still romantically interested in Yuji, who declares that he’s going to quit boxing because he’s aged out of the sport at 37. Both men end up harming Ichiko. Yuji rejects her feelings for him and uses her for sexual gratification, and Noma physically hits Ichiko and drags her to a hotel, where he rapes her. The scene is disturbing, but thankfully brief. Hurting from the emotional and physical damage incurred from the two men, Ichiko steps foot in the boxing gym for the first time.

Sakura Ando, who plays Ichiko, is a highly awarded actor who has been in Japanese film and television since 2006. She perfectly captures Ichiko’s many faces—slovenly, innocent, yearning, fighting, tender.

Two words in English are tacked onto the wall at the gym. “Hungry,” reads one. “Angry,” says the other. In the beginning it may strike you as funny, but by the time Ichiko starts training, the meaning is clear. She is hungry for a win in this life where she can’t catch a break, she is angry at the world. In many ways, 100 Yen Love is a movie about being a loser. It is an underdog story in that no one expects much from Ichiko, so she has to be the first one to expect something from herself. As she improves, she demands to be qualified for a match. What started first as a passing interest due to a crush on a stranger has become a new activity, a new obsession, even now when the stranger is no longer in the picture. In fact, in a strange reversal, Yuji at one point walks by the gym and looks longingly into the window to see Ichiko fiercely training for her qualifying test.

If this movie had a taste it would be the taste of a tough hunk of meat that you can barely sink your teeth into. If it had a smell it would smell like a small room thick with smoke. It would feel like twice worn sweaty socks. It would sound like a busy and nocturnal izakaya on a warm night. It’s reminiscent of that feeling of being restless in the wee hours of the morning, and nothing can settle you except for a reckless and impulsive activity that you might regret later on. Even with all the gritty seriousness of 100 Yen Love, there are plenty of offbeat comedic moments and awkward situations. Both types of scenes are expertly dovetailed due to a combination of Take’s vintage style, and the cast’s performances.

This film is a Film Movement exclusive premiere. Available by annual subscription or to purchase. Go to https://www.filmmovementplus.com for details.