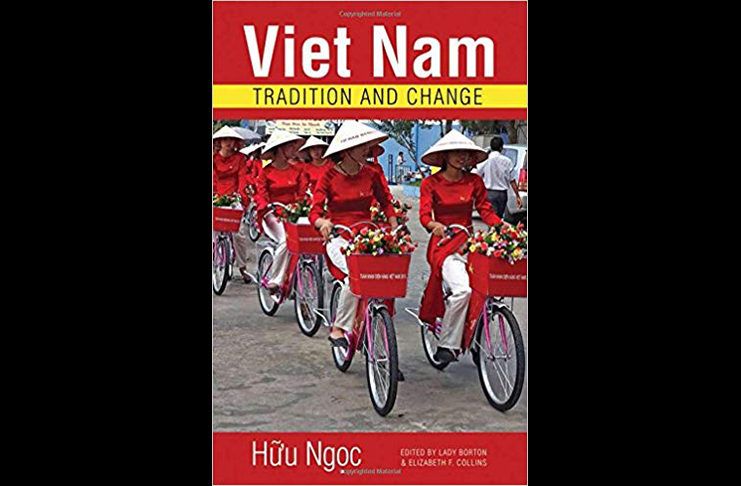 I write this on the eve of a long-anticipated trip to Việt Nam. By a stroke of luck, a friend gave me Hữu Ngọc’s book, Viet Nam Tradition and Change, weeks earlier and since then the book has been an aid in my re-immersion into Vietnamese culture.  Việt Nam is a culture of my birth and a culture that I want to keep at the forefront of my identity even if I have spent my adult years in the U.S. on the other side of the ocean from Viet Nam.

When I land in Nội Bài International Airport tomorrow in Hà Nội I want to recall this culture. The author himself is from Hà Nội and was a director of a foreign language publishing house, a past editor of a scholarly quarterly called Vietnamese Studies and a prolific author. He will be approaching 100 years of age and speaks and publishes in at least three languages: Vietnamese, English and French.

If you can imagine a teacher who is a great mind and a kindly soul, this is the image that comes to mind when you read Mr. Hữu’s approximately 100 essays on Vietnamese culture and identity. He writes with an eloquence, easiness, authority and compassionate eye towards all his subjects. He talks about the fortunes and reversals of fortunes that made Việt Nam the country it is today.

Mr. Hữu instructs us that Việt Nam is spelled in two separate words and reminds us that the language is monosyllabic. Meaning is formed by making compounding words. Thus, Việt denotes the people of the country, and Nam denotes south – so the country’s name means the People of the South.

Mr. Hữu says of Việt culture: “The Vietnamese people have preserved the substratum of their own Southeast Asian culture while enriching it with foreign contributions – mainly Chinese (Vietnamese Middle Ages) and French (modern times) – that Vietnamese have grafted into their own culture.”

Mr. Hữu adds that the country came into its own in August 1945 when Hồ Chí Minh organized an uprising in northern Vietnam and announced its aspirations for internationalizing and integrating itself into the world and declaring itself independent of colonial rule. This turn towards its own authority continued into late 1986 in an effort called Đổi Mới (or renewal), aimed at “an adoption of a market economy…. and an open-door policy…with all countries irrespective of ideology.”

Mr. Hữu speaks of two dynamic forces within the psyche of the Việt: The role of Confucianism and Buddhism.  From the former, a legacy of a 1,000 years of Chinese rule, the Việt have derived their sense of filial piety or loyalty and this is played out in relationships between king and subjects and husbands and wives. The downside is an over-adherence to this philosophy can be inhibiting to the liberation of women. Buddhism, on the other hand, is an active religion, practiced daily by many in the country. What is worth noticing is that it has the forms and flavors of Chinese Buddhism and not Indian Buddhism. The author makes a point again that like other influences, once the Việt are introduced to an influence, they take that influence and add their own rendition to it. For example, Buddhism can live side by side with ancestor worship.

Mr. Hữu can speak about high culture and water puppets and the culture of the everyday. He reminds me that there are things inherent to being Vietnamese that I have forgotten. For example, you are considered one year old the day you are born in Việt Nam because the belief that your time in the womb amounts already to one year.

In other sections of the book, the author dedicates himself to aspects of Việt spirit. In chapters called “The Vietnamese Landscape and the Vietnamese Spirit” and “Vietnamese Women and Change”, you hear his compassionate voice. In the section about women, he speaks of the practice of women who blacken their teeth (“teeth lacquering”) to show differentiation and social status and how that may be a thing of the past because women have moved on to other achievements, notably in science. He makes a special point in pointing out that traditions can hold culture from changing and cites Confucianism’s emphasis on social order and harmony as having deleterious effects on women’s empowerment.

In a perhaps off-color section, the author talks about Poulo Condor (or Côn Đảo), an island off Hồ Chí Minh City where Việt prisoners were kept by French and American forces in their respective wars against Việt Nam. Prisoners were kept naked in cages and tortured and one such torture involves guards pouring lime juices from on top of cages onto the naked, broken, wounded bodies of prisoners. (Lime juice stings.)  At the same time, this island – or technically, group of islands – holds the most pristine beaches in all of Việt Nam.

Mr. Hữu brings together the old and the new, the most colorful and the off-color of Vietnamese culture. He says tradition and change can co-exist in the best way. Việt Nam can hold both. The Vietnamese online newspaper, VietNamNet Bridge, calls him a culturist and a Master of Culture.  This book testifies to that.