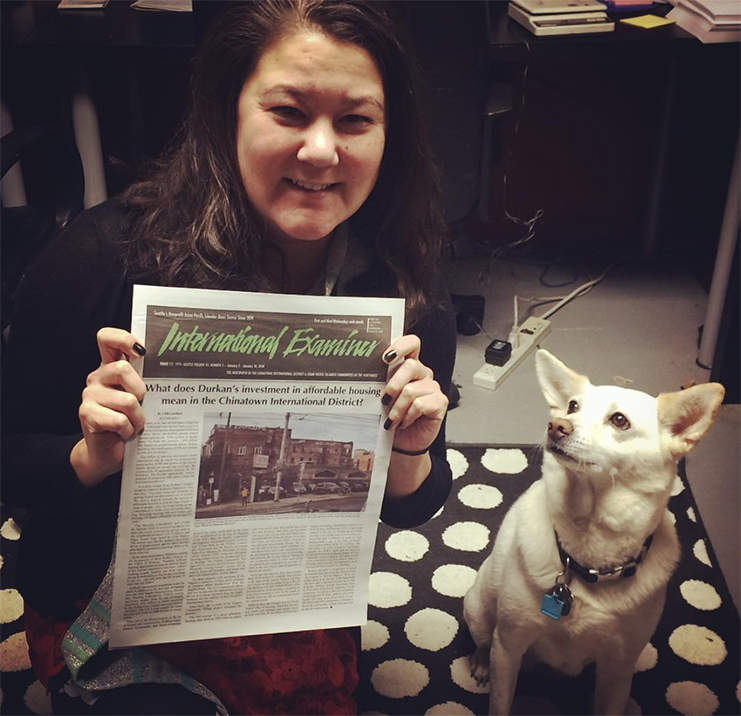 I’m saying goodbye as editor of the IE after five and a half years, and it’s one of the most intense decisions I’ve made in my life. I know there is a lot of community pride in this paper, and there should be. The IE is the community’s voice, and it’s given me a voice too.

I’m half-Korean and half-white, and I was born and raised in a very isolated, very rural coastal Washington town of 1,000 people. I grew up there in the mid-70s through mid-90s. On my white side through my grandma’s side, I’m 4th generation from that town.

When my Korean mom moved to town from war-torn Seoul in the early 1970s, nobody there could even find Korea on a map.

“Are you Chinese or Japanese?” I was asked very often in elementary school – even by teachers and administration. “I’m Korean,” I would say.

When I was a kid, I’d try to say it the way my mom said “Korean”, with the grace of a linguistic ballerina, emphasizing the “Ko”, and the other syllables settled softly afterward.

“What’s ‘kreen’?” they’d say, messy and lazy with the pronunciation, not hiding their disappointment that I had failed to fit into their rhyme about dirty knees.

Every single recess in the 1980s meant navigating intense racism among my nearly entirely white peers. Three times a day, the teacher would announce recess, and every student would run for the door. I, on the other hand, would have a hard time not crapping myself from fear. I remember begging my teachers to let me stay inside so I could be alone with the classroom pet to read my favorite books and draw cats.

I learned how to run on the playground, and I got really good at running. There was never safety. I grew up knowing friendship and loyalty were always very conditional, based on who was in the room to pick on me for my race and who would follow their lead. As a kid, I learned to do a mental tally of who would turn on me because I wasn’t fully white and how to work around them.

There were no adults of color in leadership positions in my childhood. I had no one around me who understood my mom’s experience as a Korean immigrant and a survivor of war. Or who understood being a “half-breed,” as I was called by my friends’ parents and others, sometimes in public arenas – like the middle of a rural school’s athletic event, sports being the church of small towns. Besides having my older sister, I felt quite alone as a half-breed kid and left to find my way, smiling like a homecoming queen the whole time, working my way through being Korean at home and very white outside the home.

And eventually, navigating through my adult life as a small-town half-breed, life found me in the ID when I came to the neighborhood to work for InterIm CDA and then the IE. I could finally slightly let my guard down. It was okay to be Asian. It was sort of *not* okay to be white. It was definitely okay in the ID to NOT be among or from Seattle’s tech wealth. And also here in the ID, there were a lot of AANHPI women in charge, calling the shots.

For a lot of us, this community in the ID, this neighborhood, feels natural whether we want it to or not. We are survivors. If not directly impacted by war, famine, religious or political oppression – and of course, racism – we are natural truth seekers, because we are constantly having to stand up for ourselves. So, we’re always keeping records. And you better believe we can sniff out the phonies.

As people who seek out truth, we get really tired of clichés and terms that used to mean something significant about standing up against true oppression and then just get co-opted as a catchphrase. I’ve seen a ton of them in my tenure as editor. Cliches are an editor’s kryptonite. (Hisssss!)

However. Here’s one phrase that is a cliché, but it has stuck with me as my time as the IE editor: Representation matters. “Representation matters” is corny because it’s a dated hashtag. But representation does matter. Growing up, I never had people who looked like me showing that I matter. myself in leadership roles, in athletics, on screens (unless I was a derpy dork nerd), as the love interest, the lead.

I never knew anyone was interested in my mom’s story of surviving the Korean War. Or our stories of intergenerational trauma. The Model Minority Myth. The Cambodian genocide. The Chinese Exclusion Act. Japanese American incarceration. The American War in Vietnam. Colonization of the Philippines, Hawaii, India, North America – everywhere. I didn’t think anyone cared until I landed in the ID, where everyone cared, because that was a version of their origin story, too.

Being the editor of the IE has meant showing how our stories matter, and in that aspect, it has been a dream job. There are many more like me out there not knowing that their stories, their perspectives, their experiences as non-white people matter. This paper, our coverage, can change the trajectory of a person’s life. It’s changed mine.

There’s a very good transition plan in place at the IE. There’s a highly conscientious and cerebral staff with the energy and drive to take the IE forward and up. And I’m not going far because I’ve worked way too hard these past 5-6 years at the IE to let anyone down. The editors before me each did their part to build this paper up, and we hope to leave it stronger for each successor.